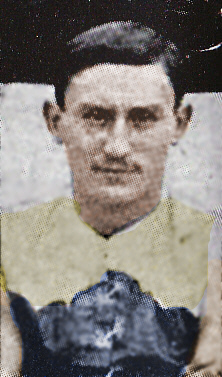 When Walter John Henry Koochew ran out to play for the Navy Blues against Essendon at Princes Park on Saturday, May 16, 1908, he became the first footballer of Chinese heritage to represent a VFL club. A rover noted for his agility and accurate kicking, he had been recruited from neighbouring VFA club Brunswick, and celebrated an 11-point win on debut.

A week later, Wally scored his first goal from a half-forward flank when Carlton beat Collingwood at Victoria Park. By late June, he had played four games without defeat, but life in Melbourne was proving more difficult than anticipated, so less than three months after joining Carlton, Wally turned his back on the VFL to return to his home town of Macedon in central Victoria. There, over the ensuing five decades, he and his descendants left an enduring mark.

Wally’s father, James, had migrated to Australia from the village of Whampoa near Canton in 1865, lured by the riches being won in the gold rushes throughout central Victoria. Instant fortune eluded Jimmy however, so he eventually turned to that other preserve of Chinese immigrants, market gardening. After working in various rural centres including Geelong and Bairnsdale, he was naturalised in 1880. By 1887, James had married Mary Dalker and the couple had established a green grocery store in the village of Macedon. Wally was born in July of that year, and grew into a natural athlete who thrived in the high country of the Macedon Ranges.

From his teenage years, Wally played football for the nearby town of Woodend, and it was from there that he was recruited by the Brunswick Magpies, then Carlton. After his brief foray into the VFL ended, Wally and his wife Axelina raised a family of five sons and a daughter. Wally was a member of Woodend’s 1914 Premiership team, but in ensuing years he became prone to ill-health. In the decade after World War I he ran a green grocery in Station St. Fairfield, and for a while sold hot-dogs on match days at the North Melbourne football ground, before he passed away on March 13, 1932, aged just 44.

The Coburg Leader reported that Koochew made his debut for Brunswick at home against Footscray on June 1, 1907; "W. Koochew, very clever rover who played so well against Brunswick at Woodend."

KOOCHEW AND THE WHITE AUSTRALIA POLICY
When Koochew was selected, a Carlton member wrote to the club in protest and resigned his membership, as noted in the following minute from the committee meeting prior to Wally’s debut.

“From C.W. Richardson, 640 Drummond St., Carlton, presenting his membership ticket to the club and requesting that his name be struck off the membership list; for the reason that the Society of Druids, to which he belonged, believed that the Carlton Club, by including a Chinaman in the team, was dealing a death blow to the White Australia policy. On the motion of Mr. Oxlade, sec. by Mr. Gurr, it was carried that the request contained in the letter that the writer’s name be struck off the membership list be complied with; Mr. Richardson to be notified to that effect.”

Wally’s second-eldest son, Wally Koochew Junior, played Reserves football with Melbourne, and was later player/coach of Northcote in the VFA.

Wally’s youngest son, Les Koochew, had an illustrious career as a field umpire in country leagues across southern Australia between 1948 and 1961, and was awarded Life Membership of the AFL Umpire’s Association in 1960.

As late as the 1990s, the Koochew connection at Carlton still remained, as Wally’s great-grandson James served the Blues as a statistician.

A brief report in The Sun (Sydney) July 21 1911 (p11) talking about the Sydney club mentions,
"Koochew, each week is showing flashes of his Carlton form."