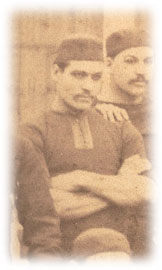 1879 May 03
W. Robertson was named in the Carlton Second Twenty team that played Rising Sun in Royal Park.

W. Robertson was runner up to Jack Spear in the Second Twenty drop kick competition held at Princes Park with a kick of 58 yards on Saturday 9 Sept. 1880.
(The Argus, Tuesday 12 Sept. 1880)

1889 August 17
Wally Robertson played for the Blues in an ex players match against former Pivotonians at Geelong to raise funds for the local hospital.