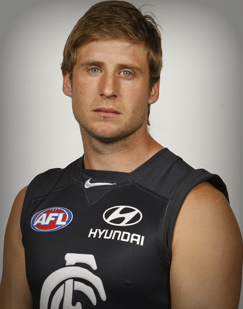 
Another of Carlton’s mature-age recruits (and no relation to the famous Collingwood family) Wayde Twomey played state league football on both sides of this vast continent before earning his chance at AFL level when he was picked up by the Navy Blues in the 2010 Rookie Draft.

Twomey was born in Tarneit, Victoria. He played his junior football at Hoppers Crossing, and by his teens was showing enough potential to be recruited by the Western Jets in the elite TAC Cup Under-18 competition. After two seasons with the Jets, he nominated for the 2004 AFL National Draft, but was overlooked. In 2005, he joined Werribee in the VFL, winning their reserves’ Best and Fairest in his first year. He made his senior debut for the Tigers the following season, and stayed with them until 2007. When not selected in the Werribee firsts, he represented Port Melbourne Colts in the Western Region Football League.

An electrician by trade, Twomey moved to Western Australia in 2008, and signed with Swan Districts in what proved to be a pivotal moment in his career. Over the next three seasons, Wayde developed into a fine running defender and occasional midfielder. He played 60 senior games for the Swans, and finished in the top five of the club’s Best and Fairest each year, highlighted by his big effort in the 2010 WAFL Grand Final. On that memorable occasion at Subiaco Oval, Twomey shut down Claremont’s star playmaker – ex-Blue Luke Blackwell – while winning plenty of the football himself to get Swan Districts home by one point in a classic contest.

It was probably that effort that convinced Carlton’s recruiters to select the 24 year-old with our third pick (number 51 overall) in the 2010 Rookie Draft. Presented with guernsey number 39 (recently discarded by Adelaide-bound Sam Jacobs) Twomey quickly settled into Princes Park, and was prominent in a series of games early in 2011 for the Northern Bullants.

Then in July, youngster Andrew McInnes suffered a shoulder injury that forced him onto Carlton’s long-term injury list. Twomey was promoted to replace him, and named to make his senior debut in the blockbuster clash against ladder-leaders Collingwood at the MCG on a Saturday afternoon in round 17. In front of 87,000 baying fans, Twomey began the game on the bench, but late in the first quarter ran onto a loose ball at half-forward, and snapped a lovely goal from 40 metres to keep the Blues on level terms. Although Carlton eventually lost by 19 points, Twomey showed virtually no first-game nerves in a steady effort.

Rewarded for that display with a place at half back in the starting line-up against Essendon the following Saturday night at the MCG, Twomey seemed less assured and troubled by his opponents’ pace for much of the game. Although the Blues romped away to a massive win by 74 points, Wayde spent considerable time on the pine and overall had little involvement. He was omitted from Carlton’s side for round 19, and played the rest of the year with Bullants.

In October, during the first day of Trade Week, the Carlton Football Club announced that Twomey, and two other fringe players; Joe Dare and Jaryd Cachia, had been informed that their services were no longer required.

After being released by the Blues, Twomey returned to Swan Districts and was soon back in top form.
In 2013, he won the Simpson Medal as Best on Ground after kicking five goals for the WAFL representative team in their hard-fought victory over the VFL.