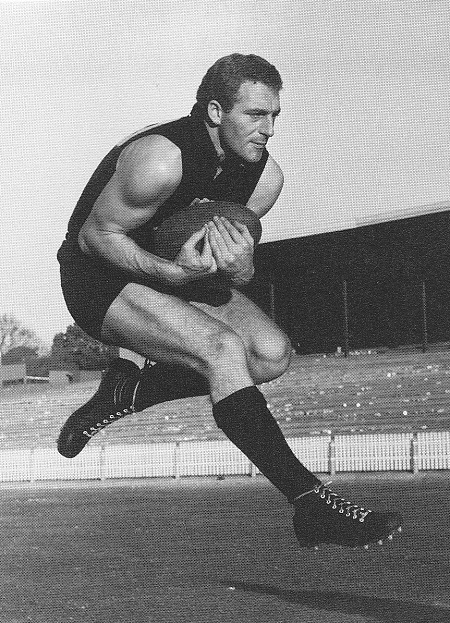 A pivotal figure at the Carlton Football Club for forty years, Wesley Victor Lofts was a tough, uncompromising Premiership full-back, and later, one of the Blues’ most powerful and influential administrators. He first came under notice in 1959, as a seventeen year-old with Carlton’s Under 19 team. Big for his age, with a safe pair of hands and a long, accurate kick, he was fast-tracked through the Reserves, and made his senior debut at centre half-forward against Geelong in round 6, 1960.

Although he began his career in guernsey 47, Lofts was wearing number 20 on his back when Carlton met Essendon in the 1962 Grand Final. Playing at centre half-back, Lofts held the Bombers’ star Ken Fraser goalless, even though Essendon as a team proved too good for the Blues, and won by 32 points. Soon afterwards, when Carlton’s popular full-back Peter Barry announced his retirement, Lofts was pencilled-in as Barry's replacement. The move was quickly justified by Lofts, who took to the key defensive post as though born to it. At 188 cm and 92 kg he was one of the biggest key defenders in the game, as well as being hard, aggressive, and a good user of the football when he got it.

By season’s end in 1963, he had announced his arrival as a VFL footballer, and capped a good year by being selected in the Victorian state team. The mid-sixties was a dry era for Carlton, when internal squabbles and poor on-field performance culminated in the overthrow of the committee. Then came the sensational defection of Melbourne legend Ron Barassi from the Demons to the Blues. Barassi’s arrival galvanised the club, and built the foundations of two decades of glory for the old Dark Navy Blues. Under Barassi, Carlton climbed back into the finals in 1967, only to tumble out again with two straight losses, yet the signs were good. Lofts continued to play tough, often ruthless football at full-back, and was rewarded with Victorian state selection for the second time.

The Blues sustained momentum throughout the ’68 season, finishing second behind Essendon after the home and away rounds. An impressive five-goal demolition of the Bombers in the second Semi Final then put the Blues straight into another Grand Final. A week later, Essendon comfortably beat Geelong to earn a rematch for the flag, with Carlton suddenly the market favourite. Then, when Lofts’ regular opponent Ken Fraser was ruled out of the decider by injury, the Bombers surprised everyone by naming a slim, spectacle-wearing teenager Geoff Blethyn to play only his third game in Fraser’s place.

It seemed like a mismatch against Lofts, but Blethyn played one of the great Grand Final games. In a dour, low-scoring match, the Essendon tyro kicked four goals in the Bombers’ score of 8.5 (53), although it wasn’t enough. Carlton claimed their ninth flag with a justified, but inaccurate scoreline of 7.14 (56) to scrape in by three points. After eight seasons and three attempts, Wes Lofts had finally achieved his dream of playing in a Premiership team for the Blues.

Two years later, his hopes of a second Premiership medal were dashed when he was left out of Carlton's team on the eve of the 1970 finals. Blues coach Ron Barassi later explained that the selection committee made the decision to drop Lofts only because of the outstanding form of Collingwood’s star full-forward Peter McKenna, who had troubled Lofts with his pace off the mark in both of their meetings throughout the year, and kicked bags of eight and nine goals respectively. With no second prize on offer on Grand Final day, the Blues simply had to contain McKenna, and were looking for a more pacy opponent for Collingwood’s trump card. 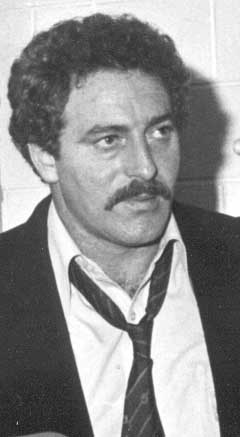 Understandably, Big Wes was gutted, and no doubt wracked by very mixed emotions when McKenna booted another nine goals in the second Semi Final to lead the Magpies to a third straight victory over Carlton - this time by 77 points. Although the Baggers rebounded to thrash St Kilda in the Preliminary Final and earn one last crack at Collingwood, the Pies went into the 1970 Grand Final as overwhelming favourites. At half-time in that amazing game, McKenna had booted five goals and Collingwood led by 44 points. Then came one of the turning points in the history of the Carlton Football Club, and indeed the game as a whole. Barassi rang the changes, brought reserve Ted Hopkins on to field, and told his team to back themselves; to run and keep running – and to "handball, handball, handball". Carlton came storming back to do the impossible, and snatched the greatest of all Grand Final wins.

The euphoria of the post-match celebrations in succeeding weeks understandably overshadowed Wes Lofts’ decision to retire. Without a lot of fanfare, he called it a day aged 27, after 167 games and 65 goals in ten seasons. His playing days had ended, but his most influential years at Princes Park were still in the future.

In 1978, Lofts was elected to the Carlton committee and appointed Chairman of Selectors. Over succeeding years, while building up a formidable private business profile of his own, he was a driving force in just about every important policy decision taken by the club. It was Lofts who convinced Ian Rice to stand for President in 1980, and it was he who brought business heavyweights John Elliott, Richard Pratt and others to the Carlton board. He retained a strong influence in the recruiting area and deserves a lot of credit for his work in laying the foundations for Carlton’s string of Premierships in 1981, 1982, 1987, and 1995.

When John Elliott was elected President of Carlton in the eighties, he and Lofts began a close working relationship spanning twenty years. For most of that time, it was a period of success and prosperity – until the new century dawned and Carlton’s financial dealings with its players were subjected to intense scrutiny by the AFL. Perhaps the biggest crisis in the long history of the Blues resulted, with the club fined almost one million dollars and denied access to the best young football talent in the country for a period of three years. That double blow resulted in the first two wooden spoons ever for the Blues, and plunged the club into deep financial crisis.

In 2002, Wes Lofts resigned from his position on the Board of Directors shortly before John Elliott was voted out of office by the members. He died twelve years later, on May 22, 2014 after a long illness, aged 71.

In 1977, the VFL instituted the Jack Titus Award, to recognise outstanding individual contributions to the game. Named in honour of the much-respected former Richmond player, match committee member, vice-president and senior coach, it was presented to Wes Lofts in 1993.