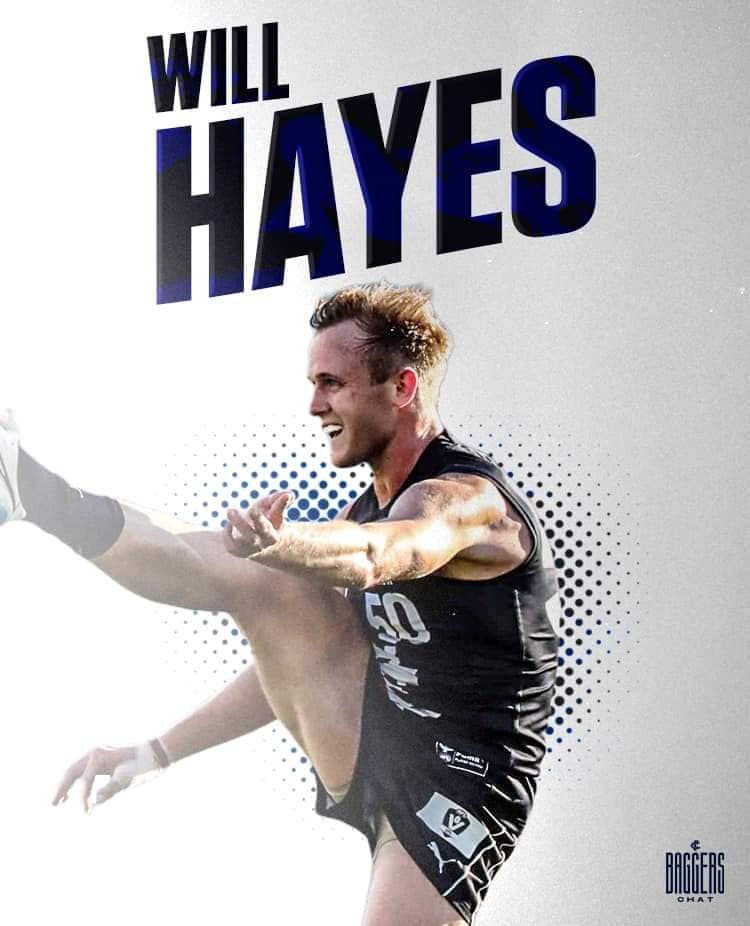 As the Blues’ standout VFL-listed player in 2022 in the state-league competition, Hayes swapped the Carlton Reserves for the team’s AFL list after being selected with pick No.22 in the 2022 NAB AFL Mid-Season Rookie Draft.

A former Western Bulldog, Hayes impressed all comers at IKON Park with his work ethic and his consistency of performance in the VFL. Able to play a combination as both an inside and outside midfielder, Hayes has averaged 33 disposals and a goal a game for the Blues’ VFL side across his six performances so far this season. Reaching his VFL century of games earlier this season, Hayes’ talents are known to many at IKON Park — not least, Ash Hansen, who coached Hayes to a VFL premiership in 2016. Despite combining his time as a VFL footballer with his work at Flemington Racecourse, Hayes’ commitment to his football was reflected in his early-season performances with the Carlton Reserves side, and it has now resulted in him getting the chance to write another chapter with his football journey. Ahead of his 27th birthday this Sunday, Hayes becomes the second player in as many seasons to make his way from the Carlton Reserves to the Blues’ AFL list, after the selection of ruckman Alex Mirkov 12 months ago. “The chance to welcome Will to our AFL list is a real reward for effort,” Blues Head of List Management Nick Austin said.

He is the son of racehorse trainer David Hayes.

Hayes was originally selected at pick #78 in the 2018 national draft, he was drafted from the Sandringham Dragons via Melbourne Grammar and previous to that Euroa. He made his senior debut for the Western Bulldogs against Carlton in round 5 of the 2019 season.