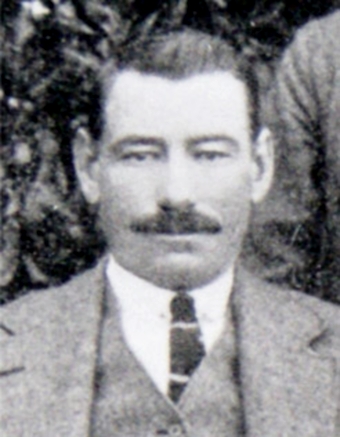 
Bill Harry played one senior game for the Navy Blues in the landmark year of 1906 – when the Carlton Football Club won its first VFL Premiership, and launched an unprecedented run of three consecutive flags. A miner by profession and a bush footballer of note, 27 year-old Harry found his way to Princes Park from Rutherglen in northern Victoria midway through that year, and was selected in a back pocket for Carlton’s important home clash against Collingwood in round 11.

Playing alongside Doug Gillespie at full-back, with Norman Clark in the opposite pocket, Bill did his part in subduing the Magpie attack, and Carlton ran out easy 6-goal winners. However, for reasons lost in time, Harry never pulled on the navy blue guernsey again. Shortly after that memorable Saturday afternoon, he returned to Rutherglen - where his life was to end in tragic circumstances some 37 years later.

William Richard Harry was born in the gold-mining town of Eldorado - north-east of Wangaratta – in 1878. The eldest in a family of 12 children raised by a Cornish tin miner, he followed his father’s profession, as well as growing into an accomplished footballer with district teams Great Southern, Miners, and Rutherglen.

Around 1906, Harry’s exploits for Rutherglen came to the notice of Carlton coach Jack Worrall, who invited him to Princes Park, and selected him for the upcoming match against Collingwood detailed above. In the years after his brief sojourn into VFL football, Bill continued to play in local competitions until well into his thirties. Later, he took up umpiring.

Around 1923, Bill and his family (which would eventually include nine children) relocated to Footscray in Melbourne’ western suburbs, chiefly because the mines of northern Victoria had all but petered out. He spent the rest of his life working in Victoria’s capital city, although he took every opportunity he could to return to the beloved bush where he had grown up.

In February 1943, while holidaying in Rutherglen, 64 year-old Harry went duck shooting on the Murray River. When he didn’t return as expected, a search was mounted and his body was soon found in a nearby lagoon. Evidence indicated that he had swum out to retrieve a downed bird, but got into difficulties and drowned.