The surprise moves of Bret Thornton to the forward line in our Round 9 loss to the Crows and Michael Jamison in our Round 15 win over the Tigers brought to bear the obvious question - how can we be reliant on these guys to kick goals for us when they've hardly managed to score in their entire careers to this point?!! With this question in mind, the Blueseum sought to understand the rare goal-kicking feats of defenders past, and to see where Thornton and Jamison compare with some of our other greats.

Firstly, the big question had to be asked - could Jamison break the record for games played without snagging a major? Surely after 40 or so games - with which Jamison would break a different record - he'd be getting close.

Well, we are happy to advise that Jamison, has a good 80 games or so of being barren before cracking the record, unfortunately held by Blues Legend and triple Premiership Player (1906-1908), Billy Payne. Payne, as you can see from Table 1, heads our list of barren players with no goals from 127 matches. He may have 3 Premiership Medallions, but Payne just could not score a goal. In second place, with an impressive Nelson of no goals is John O'Connell, who just could not quite manage to score a goal in his long and successful career with the Blues. 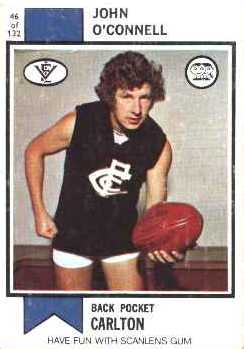 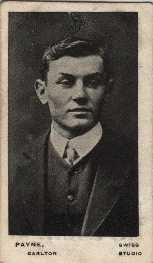 Overall, 10 Blues have played 50 games or more without scoring a goal for Carlton (NB Kevin Heath also played at Hawthorn, and snagged 43 majors!). That's a minimum of 2 full seasons without the glory! Also added to this list for noting are some Carlton legends with 1, 2 or 3 majors only despite illustrious careers. Don McIntyre kicked 2 in his 100 games, whilst the great Hackenschmidt only managed 3 in his 126 impressive games.

Which brings us to another record - when did these champs actually kick their first goals - did they finish their careers as part time forwards, and perhaps play 100 games - like Payne and O'Connell - without kicking a major? We set out to review the history books by games played before the first majors, and given the players who kicked 1 or less goals in their first 100, the results were equally as fascinating:

Putting Payne and O'Connell to the side, the first cab off the rank on this point is Jim Francis who only kicked one goal in his first 100 for Carlton. If you follow his career along, you can see that he actually finishes up with over 50 goals from his 160 games, as Francis spent more & more time up forward as his career progressed. Also of interest is Geoff Southby who in his brilliant career also only kicked one major in his first 100 games. Southby's 31 goals is worth looking into as well - 23 came in a single year, 1976. Bret Thornton indeed makes the list with 2 goals out of 128 games, but only 1 in his first 100. Thornton rounds out the list of 10 Blues to crack 100 games but to have only kicked a maximum of 1 goal!

To round out the story, only 2 of our 'Barren Blues' did not play, or are yet to play in a Premiership. The old adage of Premiership teams being based on great defences - including those who never kicked a goal (or the solitary major) indeed rings true.


Blueseum Footnote: Jamison would kick his first AFL goal in Round 22, 2011, being his 68th match.

Blueseum: Our biggest goalkickers - on average