You are looking at what is believed to be the oldest known image of an Australian football team, the Carlton football team of 1868. This copy of the original, measuring just 7.5 x 8.5 centimetres, and pasted into a scrapbook of the early 1900s, was found in storage in an old matchday bar within close proximity of the old football department on the first level of the Richard Pratt Stand at Visy Park.

A raw, cropped copy of this image previously appeared in Hugh Buggy’s book The Carlton Story, released back in 1958. A similar image then appeared another 32 years later in the first edition of Geoffrey Blainey’s tome A Game of Our Own, as well as Brian Hansen’s The Blue Boys in 2002.

But it is understood that this uncropped image of the players, presumably resting beneath the gums in a moment’s respite from training, has never before appeared in any club publication.

Trevor Ruddell, the Assistant Librarian at the MCC, said that while he had not viewed the particular image found in the scrapbook, “I strongly suspect it may have been removed from the 1908 carnival programme: Official Programme: Jubilee of Australian Football: Melbourne - August 1908”.

Ruddell added that “if the 1868 date is accurate (and looking at the dress, etc. I have no reason to doubt it) I personally know of no earlier photo (or reproduction of a photo) of an Australian Football team”. 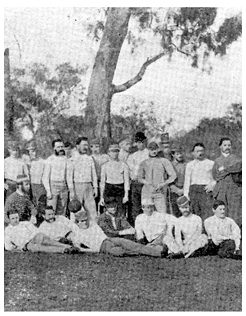 “However, things often to come to light when they are least expected,” Ruddell said.

The original photograph was almost certainly captured at Royal Park, the club’s first home ground for a ten-year period from 1865, which in part took in the pre-VFA seasons. In those days the players sported the blue band and orange cap.

Regrettably, this historic image does not carry the name of the photograph or the names of the Carlton players and officials. But club records attest that Jack Conway was captain of the Carlton team in 1868, with Dave Adamson the vice-captain. Other luminaries of the 1868 team included the club’s first captain Harry Chadwick, “Lanty” O’Brien, Col. Robert Robertson and Charles “Chubby” Forrester.

The following Carlton footballers are also known to have represented the club in 1868. The club would welcome contact from any descendants of this revered group in the hope that the original photograph may one day surface.