As if the onfield collapse of the playing group in 2015 was bad enough for players and fans alike, there was one other factor that grated us all as the season wore on. Whilst Carlton's season ended early and with another Wooden Spoon, a number of ex-Blues played further in to the year for their new clubs. It was bad enough that we were out and embarrassed, but to feed the hopes of other fans was galling indeed. And when many of them starred in finals footy for their new Club, cans were indeed thrown at TVs!

1. The Facts
First, the facts. 5 X-Blues took up arms for competing clubs in the 2015 finals campaign:

2. The Damage
Now the reasons for departures varied from trades, free agency, to delisting. It is fair to say that in each instance fans saw what was happening. We will take you through them in detail, below.

A. Jarrad Waite
Waite, son of Vin, played 184 games with the Blues and as he headed in to his 30's, took an obvious career decision to a) maximise longevity (North offered 2 years, Carlton 1) and b) perhaps have some success. His move to North under Free Agency rules after a decade at the Blues was sad but made sense. Besides, he was at his frustrating best in 2013 and 2014. 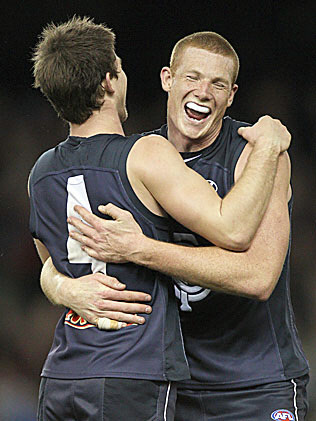 It has to be said that Waite's finals campaign for North was fantastic...

B. Sam Jacobs
With a number of good young rucks on the list, Jacobs decided he would leave for 'home' in SA after 17 games. With Warnock, Hampson and Kreuzer competing for roles it made sense. We weren't happy with a pick in the 30's but the Crows had Jacobs.

Multiple BOGs and over 100 games later, Jacob's finals in 2015 were spectacular in a standard way - mid teen stats and 40 hitouts (or so). The sort of stats we yearned for from Kreuzer, whilst Hampson had departed to Richmond and Warnock was about to retire...

C. Eddie Betts
Crowd Favourite Betts, a pocket rocket, left Carlton under Free Agency rules at the end of 2013. In the rules of the time, Carlton could have matched a big $ / 4 year offer but chose not to; instead it signed Dale Thomas from the Pies.

Eddie would go on to kick big bags of goals and would assist the Crows to make the finals in 2015. Once there, the highs & lows of Eddie were apparent; a brilliant 5 goal game against the Dogs in the Elimination Final but a deathly quiet nil goal game against the Hawks in the Semi. We all loved Eddie but the ability of a 173cm forward to win big games was always in question.

D. Jeremy Laidler
Laidler joined for the Blues for 2011 after a few seasons at the Cats. It seemed an inspired choice with Laidler filling a hole in defence straight away.

With the arrival of Mick Malthouse, however, things changed. Laidler was not given senior games and spent the year in the twos before being delisted. The Swans gave him a lifeline but in 2014 he was not selected for their campaign, yet, in 2015, Laidler was a standout in defence as the Swans crashed (it's fair to say their defence was constantly under pressure). 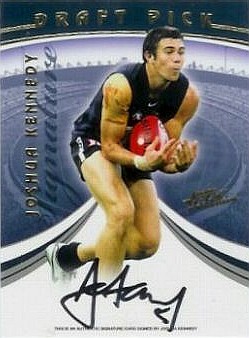 A tireless worker, Laidler's calmness would surely have been required at Carlton had we simply just not let him go...

E. Josh Kennedy
A key part of the trade that saw Legend Chris Judd join Carlton, Kennedy had begun at the Blues as an early pick. He played 22 games.

In 2015 he kicked 80 goals all up for the Eagles as the Coleman Medallist and the game's leading forward. Debate the trade all you like, but seeing Kennedy out there for the Eagles was a sight to behold - a tall, if not gangly, hard leading key forward with great hands, team ethic and work ethic.


3. Epilogue
We are where we are - at the bottom with a good number of X-Blues elsewhere. History will explore the reasons why (perhaps to be logged here), but it is fair to say in 2015 Carlton fans pondered the above departures in the same depth achieved by our 'current players'. With a huge clean out in the list for 2016, we just wonder whether more players will be added to the list!


PS. The above article only addresses X-Blues who played finals. Carlton fans also endured Jeffery Garlett and Mitch Robinson having good seasons for their respective new Clubs. The Blueseum respects the right of the Carlton Football Club to release players for disciplinary reasons....

In addition, Shaun Hampson would play 4 games for Richmond in 2015 but would not be selected for their finals campaign...