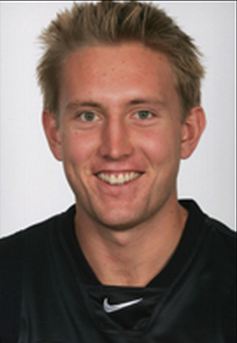 Sam 'Plemo' Pleming was a courageous key forward type from Maffra, Pleming was on Carlton's Rookie List for 2 years from 2004 to 2005. One of two players retained on the rookie list by the Blues, the young key position player caught the eye on several occasions in the VFL with the Northern Bullants. Has good skills for a big man and doesn't lack courage.

In 2006 he went to Port Melbourne in the VFL and was a member of their 2011 premiership side.

In 2015 Pleming headed back home to his original team Maffra, he was still running around with Maffra in 2018.


Port champion Sam Pleming hits 200-match milestone
IT’S as if his name is rusted to the Port Melbourne results. In the past few years, more often than not S Pleming has featured in the Borough best. When Sam Pleming played his 150th senior VFL game a couple of years ago, Port board man Les Quarrell reckoned the defender they call “Plum’’ had been in the list of best players at least 100 times. Year-by-year results on the VFL website go back only to 2010, but they suggest Quarrell was close to the mark. In 2010 Pleming has 13 mentions in the top six players. In 2011 he had 10 mentions. In 2012 it was 12. Last year he got up to 15. The numbers bear out Pleming’s consistency. He has been a remarkably productive player for Port since joining it in 2006 after spending 2004 and ’05 on Carlton’s rookie list. The sight of him taking intercepting marks across the half back line and turning defence into attack with canny disposal has been a staple of Port games for close to a decade. He reads the game as if it’s an alphabet book for kinder kids. Durability is another asset: he’s missed only three matches in nine seasons, two with a finger he cut at work in 2008 and one with a rolled ankle in 2010. Honours have piled up around Pleming: Port’s 2011 premiership, state jumpers in 2012-13, best and fairests in 2010-11, team of-the-year selections from 2010-13 and VFL life membership. This week brings more recognition: his 200th senior match, a rare milestone in the VFL these days. Realising their prospects of being drafted are limited, many players drift back to suburban or country football with 30 or 40 games behind them. It’s less of a commitment but it brings better money. Pleming, from Maffra, thought of returning to Gippsland when he was cut by Carlton. But ex-Port Melbourne coach Saade Ghazi put in a phone call and enticed him to the Borough. “I had a couple of good mates living in Melbourne so I thought I’d hang around and give it another crack,’’ he said. “There wasn’t much other interest to be honest so it was a no-brainer to go to Port. Glad I did. At VFL level it’s as close as you can get to a country footy club.’’ Pleming says he was gifted games at the Northern Bullants because he was a Carlton rookie. “There were a few there I didn’t really deserve. I wasn’t playing that well. But it makes a bit of a difference to your development. You get 30-odd games up and you can start to adjust. That time there really helped me.’’ The Blues drafted him as a forward but in his second year he was switched to defence. He’s been there since, combining negating with creating. He thinks his stint as a forward came in handy when he went from goal kicking to goal saving. “You’ve got to defend first and try to win the ball back. It’s only then that you can start thinking about peeling off. You’ve got to pick your moment to attack,’’ he said. What about the influence of Gary Ayres on his career? Port Melbourne players hymn praise of their coach. Pleming says that as Port set out as a stand-alone club there was always a doubt if it could compete with aligned teams flush with AFL players. Pleming said Ayres “threw that straight out of the window’’. “He really gave us self-belief, said we were good enough. We made a grand final in his first year (2008). He’s been unbelievable, not just for me but the whole club.’’ Port Melbourne full back Dan Noonan sees the Borough No 36 in front of him every week and appreciates his courage, skill and ability to find another level when pressure is bearing down. Noonan knew little about Pleming when he joined the club three years ago. Now he calls him “one of the best players, if not the best player, I’ve played with’’. “I found out pretty quickly just how good he was and just how respected he was among the guys,’’ he said. Pleming, 28, plays his 200th match against Essendon at Windy Hill on May 17. Les Quarrell is backing him to be on the list of best players. - Paul Amy, Port Phillip Leader (12th May 2014). 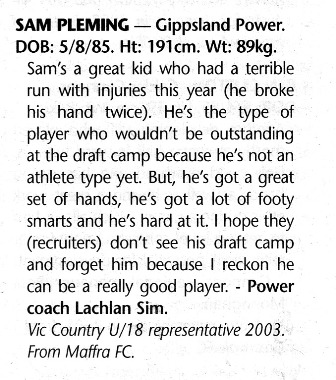