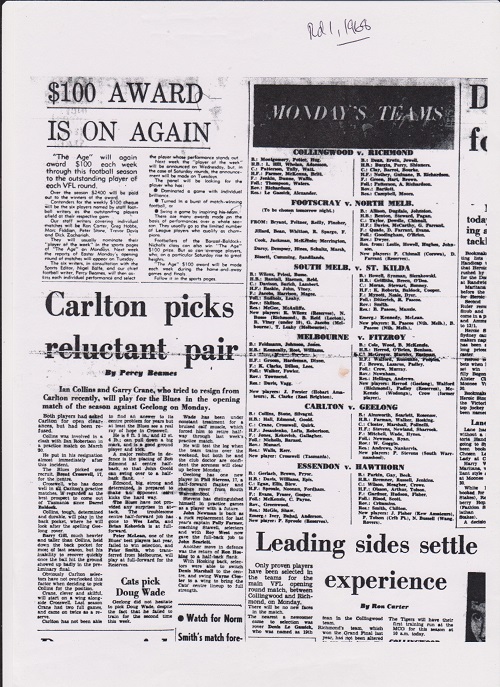 Gary was the Best!

Carlton Picks Reluctant Pair was the unexpected headline that greeted Carlton supporters leading into Round 1, 1968. The headline came from Percy Beames
at The Age. He stated, “Ian Collins and Gary Crane, who tried to resign from Carlton recently, will play for the Blues in the opening match of the season against Geelong. Both players had asked Carlton for open clearances, but had been refused”.


It was an unexpected and a confronting headline if one considers how much of Carlton’s success in 1968 hinged on Crane’s decision to stay with the Blues. From this “reluctant” player came the headline of “Gary was Best” following Gary Crane’s best on ground role in the 1968 Grand Final. The other “reluctant” star, Ian Collins, received best on ground votes in the Grand Final as well.


Using a 3-2-1 point system, five of the seven football writers for The Sun newspaper (including football icons in Peter Hudson and Lou Richards) considered Crane as the best player in the grand final. The other two in the panel considered him 2nd best on ground. The vote tally was:


The Age’s newspaper panel also came to the same conclusion as the writers at The Sun. Their panel included coaching legend Norm Smith and the premiership player for Melbourne Percy Beames, who was also The Age’s leading football journalist at the time. Four of their group of six rated Crane best on ground. On a 3/2/1 basis collectively their votes were as follows:

With the evidence of video footage it is easy to see why Gary Crane was rated so highly in the match. Two of the major reasons for his high rating include the following factors:

1: Crane figured in three of Carlton’s seven goals.
Carlton struggled in the first quarter of the 1968 Grand Final to score goals. In grand finals it is usually vital to get a confident start, yet the Blues looked nervous and they missed opportunities until Crane broke the deadlock to kick the club’s first goal of the match. And it was one of the oddest goals seen in grand finals history due to the peculiar bounce. The ball landed in the goal square and angled towards a behind, but instead bounced high and at odds with its expected direction and back into the goals. It eluded an Essendon defender by inches.


Regarding this goal, Gary Crane stated, “A left foot torpedo. How flukey was that? Still, this goal set up my confidence for the rest of the game.” Although Carlton only scored seven goals for the entire grand final, Crane proved what a valuable contributor he was for Carlton by figuring in three of those seven goals.


Crane had a part in Carlton’s 2nd goal due to his quick-fire handpass to Gallagher whilst lying flat on the ground. Gallagher in turn passed to Kekovich for the goal. And then Crane set up the Blues’ 3rd goal with a foot pass to Munari who in turn passed the ball to the goal kicker, Brian Kekovich.


2: Crane’s possession tally
By the final siren, Gary Crane was the leading possession winner on the ground. He had 29 possessions (25 kicks, 4 handpasses and 6 marks). This was an outstanding possession tally for the times, because during the 1960s the style of play was largely based on contested football, so that gave few opportunities to rack up uncontested possessions on the backline as occurs in today’s football. As a matter of comparison, Carlton’s top rover in 1968 Adrian Gallagher had a license to roam across the field and yet he only topped this total of 29 possessions twice in the whole of the home and away season.


Crane’s possession tally was so impressive that it allows one to question the widespread belief in the media that Richmond had the best wingers in the game during the late 1960s. Carlton’s outstanding wingmen of Crane and Quirk have largely been overlooked in comparison to Richmond’s wingers of Bourke and Clay. The trend at the time may have been for bigger, taller and more robust wingmen, but no matter what the era nothing can replace the key ingredients for a winger of speed and courage. Crane well and truly had these attributes.


As the statistics below indicate, the leading possession winners in the other grand finals from the 1960s were usually the followers (rovers or ruck-rovers) or the centremen. Wingers only topped the possession tally on two occasions and they were two Carlton players, Crane and Quirk, who featured. It was not Richmond’s Bourke and Clay or any other notable wingman of the era who led the possession count in a grand final.

Despite the emphatic praise Gary Crane received from the newspaper critics plus his unmatched possession tally it seems unlikely that a retrospective Norm Smith Medal will be awarded to him. This is contrast to the policy at the NRL of awarding many of their best players in grand finals a retrospective award. In 2008, the NRL decided to award retrospective Clive Churchill Medals for players from 1954 up to 1985. They did it as a mark of respect for their greatest players. Unfortunately, the AFL has no such plans of honouring their greats.


Crane was clearly the best on ground in the 1968 Grand Final. There are also other great grand final players from the 1960s and 1970s who we have video footage of and who received universal praise as the best in their respective grand finals. These players have not received their due recognition.


Random examples of players who were clearly best on ground in a grand final prior to the inaugural Norm Smith Medal of 1979 must include Brendan Edwards of Hawthorn in the 1961 Grand Final. He accrued 37 possessions and received the best on ground votes from every single person on The Sun’s panel. Then in 1972 there was Carlton’s Robert Walls. He kicked six goals and had seven goal assists plus 20 votes from The Sun’s team of football writers. The next best vote tally from another player was six votes.


None of these players are likely to receive any official recognition from the AFL for their contribution to grand final history with a retrospective Norm Smith Medal, but at the very least it is not too much to ask for Carlton to honour its greats internally and provide Crane with official recognition in some capacity. Perhaps it could even be done by creating a new finals award from within the club or by honouring him at the Best and Fairest night. Whatever it is it surely isn’t too much to thank Crane officially for his large role in ending Carlton’s premiership drought and thereby setting the club on track for further success because in 1968, as the headline in The Sun stated – Gary was best!


Quote from Gary Crane:
“My strengths as a player were being hard at ball & being able to read the game. Back in country football I played on small grounds at centre half forward. There was no place to hide. I had an ability to use my body even though I was thin.

“My main memory after the game (the 1968 Grand Final) is receiving the first pat on the head from Barassi I think I had ever received.”