Brereton, who originally hailed from Cohuna on the banks of Gunbower Creek, was first named with Maryborough’s Nicholls and another debutant Eaglehawk’s Denis Strauch for the opening round match of the 1957 season against Hawthorn at Princes Park on Easter Saturday.

The three young countrymen – from left to right Strauch, Brereton and Nicholls – are pictured with their Carlton coach Jim Francis in the lead-up to that encounter.

Then 20, Brereton took his place in a forward pocket, with 20 year-old Strauch starting at centre half-forward and a fresh-faced ‘Big Nick’, then 17, lining up in a back pocket, and Carlton captain Ken Hands sharing following duties with Kevin Clarke.

Though the visitors’ 7.4 to 1.3 opening term effectively ended the contest before it had begun, Brereton booted three goals in an auspicious maiden senior appearance for the Blues, who ended 36 points adrift of the visitors by siren time.

For the next five seasons and a further 71 senior games through to the drawn 1962 Preliminary Final with Geelong, Brereton, wearing the No.6 of the recently-retired Kade Simpson, capably served as a fleet-of-foot rover with canny goal sense.

Nicholls remembered making his debut with Brereton and Strauch. 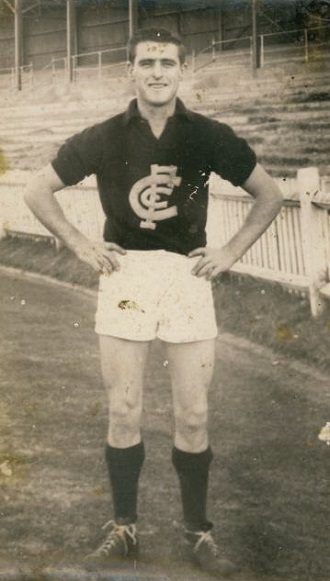 “Leo came down from Cohuna and he was a character. I got on with him and I’m sad that he’s gone,” Nicholls said.

“He wasn’t an A-grader as a League footballer, but he was all right. He shared roving duties with Bruce Williams for the most part, and he could kick a goal. They used to call him ‘Stringy’ because he was all bones and sinews . . . there wasn’t much of him.

“I’m pretty certain he went back to the bush after he finished at Carlton.”

Nicholls’ recollections proved correct as an unnamed scribe for The Age reported in May 1963 that Brereton had been cleared to Nagambie.

“Brereton, who is 26 and has played 70 games with the Blues, has been unable to force his way into the senior team this season. Nagambie club officials were at Princes Park last night and discussed the clearance with Carlton officials,” the reporter noted.

“Carlton chairman of selectors, Mr. Percy Bentley, said last night Nagambie was getting a League player who had plenty of football ahead of him. The Blues’ action in clearing him was a reminder to country clubs generally that League clubs were prepared to help them whenever possible.”

Brereton, who also captained and coached the now-defunct Manuka Football Club in Canberra before ultimately returning to Cohuna, was the 707th player to represent the Carlton Football Club at senior level since the foundation year of the VFL in 1897.

With his passing - and the 29-game Strauch having tragically lost his life to a blood-related illness at just 28 in June 1965 - Nicholls becomes the last man standing of the Carlton triumvirate to have taken the field in that historic match with Hawthorn some 63 years ago.

Leo Bernard Brereton, an ardent Carlton supporter his entire life, died peacefully in a unit in the Cohuna Caravan Park (where he had lived for the past 23 years) on Monday, October 12. He is survived by his daughters Debra and Linda, five grandchildren and three great grandchildren. Debra, who was with him to the end, said of Brereton: “My Dad would have kids visit and ask him about playing footy. He loved to talk footy. His advice was always the same: ‘’Run fast and kick the ball straight kids’.”

A restricted funeral service will be livestreamed on Friday from 1.30pm (to access the link go to www.adamsfunerals.com.au) before he is laid to rest at Cohuna Lawn Cemetery.