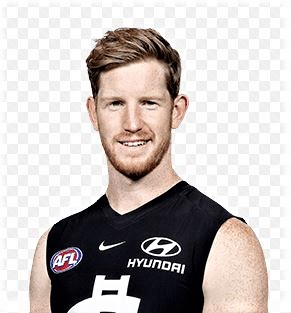 Matthew Lobbe ended up at Carlton after the Blues used its 6th round selection in the 2017 pre-draft trade period, Lobbe brings size and experience to Ikon Park and was considered a more than able ally to the Blues’ bigmen Kreuzer and Phillips. Lobbe was originally drafted in the 2007 NAB AFL Draft as a first round selection (Port Adelaide) and being No.16 overall.

The former Port Adelaide vice-captain joined Carlton for 2018 after 92 senior appearances through eight seasons with the Power.

After spending the early parts of the 2018 season with the Northern Blues, Lobbe was called up for his Carlton Debut in the round 18 clash with Hawthorn. 6 games to finish the year showed his safe pair of hands and solid ruckwork, in the absence of the injured Kreuzer and Phillips. Lobbe would play his 8th and final game with the Blues in the Round 4 clash with the Gold Coast Suns, this would also be his 100th AFL Game. At the conclusion of the 2019 season Lobbe was delisted by the Blues.