Carlton dealt a severe blow to St Kilda's finals hopes with a 22 point win in perfect football weather at Princes Park. The Blues were too powerful for the Saints in a complete team performance.

Coach Frank Maher put the players through a sharp, hour long training session on Thursday night, with players at top pace for most of it. Frank Anderson and Ron Cooper had recovered and were included at the expense of Alby De Luca and Wally Mutimer. Jim Park was made 19th man.

St.Kilda attacked from the bounce and repeatedly had the Carlton defenders under pressure. The back line led by Frank Anderson repelled many of these moves. However the Saints wasted their numerous opportunities and managed only behinds. Then it was the Blues who attacked for the first time and led by Frank Gill and Keith Shea opportunities were given to Maurie Johnson and Ansell Clarke to both score goals within two minutes of each other. Harry Vallence then missed a very get-able goal from straight in front. The Blues were playing very attractive and direct football - straight down the ground. St. Kilda finally bought up their first major. Charlie Davey and 'Micky' Crisp provided chances by driving the ball into the forward line. Carlton then scored two goals, one each to Harry Vallence and remarkable over the head snap by Maurie Johnson. The Blues were now controlling the game and just before quarter time Harry Vallence bought up his second and Carlton's fifth goal to lead by 26 points. (5.7 - 1.5)

After the break the Saints were revitalized and scored three very good goals to reduce the lead to 8 points. The Blues attacked but the St. Kilda back men withstood the pressure and the Saints, not to be out done added another goal. Ansell Clarke added a much need goal for the Blues. St.Kilda's physical pressure was having a telling effect and they added another goal and the margin was just 2 points. They should have held a good lead. A Saints defender then made a mistake by kicking across goal and his misjudged kick fell into the hands of Ron Cooper who snapped truly. In this quarter St.Kilda played the game down the flanks and by-passed the dominant Keith Shea who had provided much drive for the Blues in the first term. At half time Carlton led by 5 points. (8.12 - 8.7)

St.Kilda attacked repeatedly but as in the first quarter they wasted their chances. Eric Huxtable was now coming into the game through his long relieving dashes out of defence. He gave Ron Cooper an easy chance to goal but he missed the sticks completely. The Blues kept attacking but couldn't pierce the Saints strong defence. Keith Shea was playing one of his best games. From the boundary Shea fired in a low sharp pass to Keith Dunn who marked strongly and kicked Carlton's ninth goal. The Blues were now getting the upper hand and again playing through Keith Shea. Shea set up Harry Vallence for the tenth goal. Good play down the wing by Frank Anderson, Eric Huxtable, Bob Green, Keith Shea, Ron Cooper, Ansell Clarke and onto Keith Dunn who added another goal. The Blues were now back on top when Jim Francis dashed in and forwarded a kick to Ron Cooper who passed to Harry Vallance and the the lead was back out to 26 points. The Saints added a much needed goal just before the bell. At the last break Carlton led by 20 points. (12.16 - 10.8)

The last quarter began with a dazzling display when Carlton rammed on 3 goals in quick succession, putting the game beyond St.Kilda's reach. First, through Keith Shea's brilliant centre play who left his opponents standing, he got the ball onto Ron Cooper who then passed to Ansell Clarke for a running shot. The second via a mark taken by Harry Vallence and the third through the agency of 'Micky' Crisp to goal on the run. The grand stand was rocking, 3 goals in as many minutes, the home crowd hadn't seen such a dazzling display of football for a long time. Left alone by the Saints defenders Jack Hale frantically waved to Harry Vallence who on a difficult angle ignored Hale and scored a point. The visitors then hit back with 2 quick goals. While they had players in the trainers' hands, the Saints managed to score 3 more goals. The crowd sensing an upset were roaring. The Blues alert to the danger threw everything into their game. Keith Shea was instrumental in getting the ball to Crisp but his shot only bought up a minor score. Charlie Davey's great timely mark in defence and saved the game. Ted Pollock then kicked to Maurie Johnson who kicked the Blues' seventeenth goal. Charlie Davey marked on the goal line and his accurate kick after the bell had sounded enabled the Blues to run out victors by 22 points. (18.22 - 16.10)

"Shea's development as a centre man at Carlton has been one of the outstanding features of the season. He is in devastating form, and week after week and becomes more and more an idol at Carlton. Hender troubled him at times on Saturday, but Shea's artistry triumphed in the end." (Age Aug 26 p6)

At the end of this round Carlton were in 3rd spot on the ladder with a percentage of 137.6, only two points behind Collingwood, due to that side's second draw of the season, and still six points clear of Richmond. St Kilda's chances of making the four had become harder, and Fitzroy's loss to Richmond had ended their finals chances. 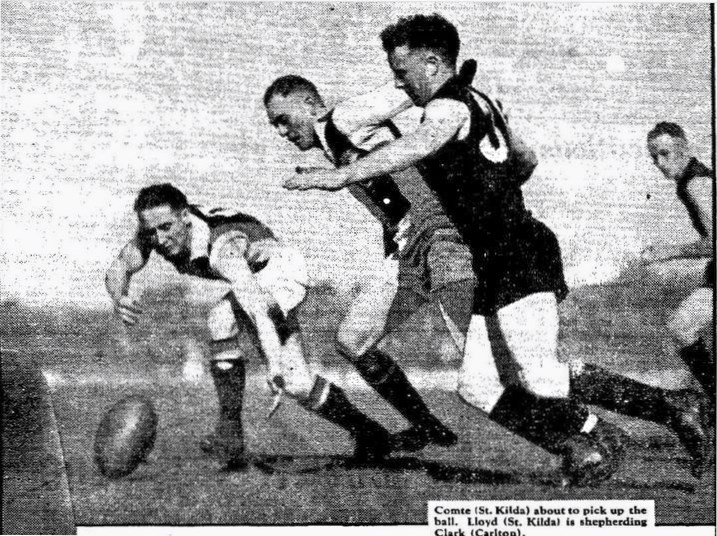