Carlton proved too good for St Kilda by 11 points at Princes Park.

The Blues won this game in the first quarter when at one stage they kicked 5 goals straight. They nonplussed St.Kilda with bewildering chains of hand ball and accurately kicked to forwards who were on their own. With a 27-point buffer they were able to see off all the Saints' challenges. The tight defence stonewalled the Saints attacking moves. Twice the visitors came within 5 points during the third and final terms. Gordon Collis had the best of Ian Stewart who failed to return to the field after half time. John Goold was in season best form and his marking was a highlight.

"It was vintage Barassi when he marked brilliantly above the pack in the first quarter at Carlton and then, almost nonchalantly, sent the ball through from the half-forward flank with a perfect torpedo punt. It was about 50 yards out, but the ball was still in full flight as it went through. The other eye-catching goal in the first quarter was from the smooth-moving half forward Ian Robertson, who loped clear of the pack and drilled it dead centre with a 40 yard stab kick." (The Age)

"Ron Barassi the astute helmsman, read the current of the game perfectly and made himself the spare man wherever the action was hottest. Frequently this was in defence, where he snapped up anything that evaded the regular backmen. But, he would be found in the forwards when the Blues got the run of the ball and broke clear." (The Age) 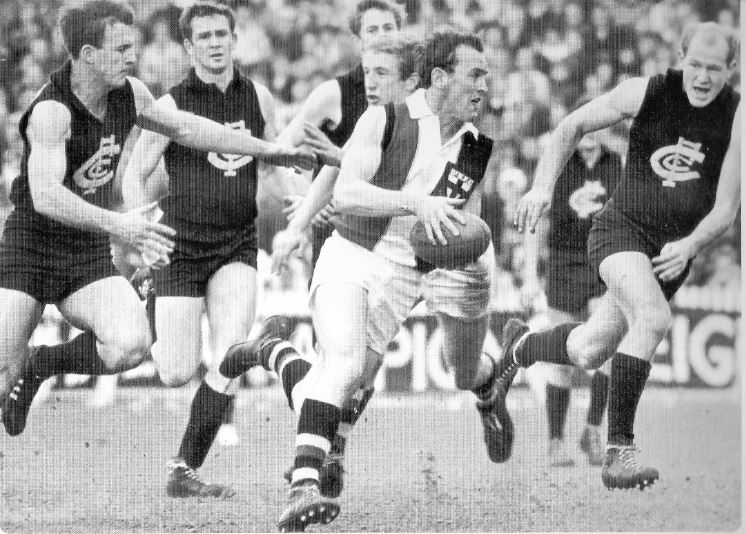