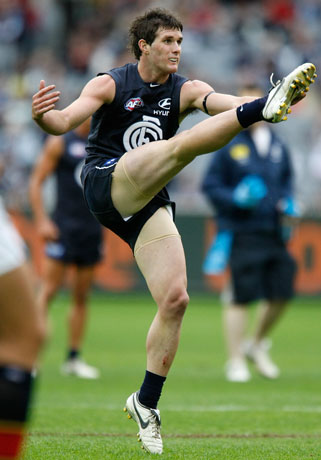 
Steven Browne, a defender from West Perth, was selected with pick 36 in the 2007 AFL National Draft. His junior club before West Perth was Whitfords in Western Australia.

Browne made his debut in Round 6, 2008 at the MCG against Adelaide and was impressive and scored a goal during the second quarter when he accepted a pass from Adam Bentick. The following week, Browne played in his first victory at Carlton against West Coast, again managing to score a goal to make it 2 from his first 2 matches. At half time, Browne was also a leading possession winner for the Blues, with him making a nice start to his Blue career. His impact would continue, with an all round nice game and pivotal 50 metre goal in Round 9, 2008. He managed 13 games in his debut season- an encouraging start.

2009 saw him play his first game in Round 8 against Collingwood. He had a career high 25 disposals and was one of Carlton's few good players in the Round 9 loss to Adelaide. A run of six consecutive games ended in Round 13 against Essendon and he was one of a number of players to pay the price for that loss, along with Nick Stevens and Heath Scotland. He would be recalled for the Round 22 match against Adelaide after the suspension of three players but then made way for their return the following week. All up he managed just 7 games in 2009.

Made to wait until Round 10 for his first game of 2010, Browne earned 14 possessions and kicked a goal in the win over the Eagles. Interestingly half of his 6 career goals were kicked against the Eagles. It was the first of three games in a row for Browne, who was demoted after the Round 12 loss to the Roos and would not be recalled again. After 23 games in three seasons (just 10 in the last two) he was not retained on Carlton's list after 2010. In 2011, Browne headed back to WAFL club West Perth.