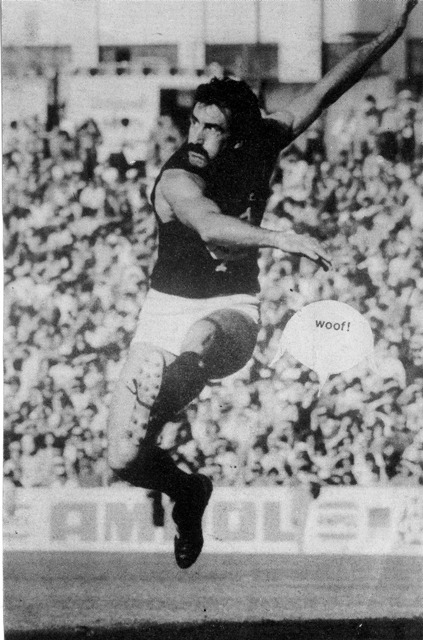 
At times throughout Adam Hartlett's brief career you could hear the crowd try and support him with a similar call, but perhaps it was the arrival of Zach Tuohy or Matthew Watson for 2011 and beyond that would resuscitate this Carlton tradition. In round 16 of 2022 Ang Christou put out a call to give Adam Saad the honour of being the next recipient of the 'Woof', the raking left footer did not disappoint with 18 kicks and plenty of crowd enthusiasm. The Blueseum awaits to see if the tradition will continue.

From 'The Birth of the Woof' article:


Paul Kelly once wrote that "from little things big things grow", a sentiment that duly applies to the evolution of the "Woof" at the Carlton Football Club. Frank Andreula was one of the original group that came up with the idea to shout "Boof" whenever Val Perovic booted the ball. Frank described to the Blueseum how the six high school friends who regularly watched and enjoyed the footy at Princes Park from in front of the old press box wanted to honour the kicking prowess of recent recruit, Val Perovic. The idea which originated at the start of the 1982 VFL season was to imitate the sound of the foot connecting with the ball to accentuate the kick itself.

Understandably six people in a crowd of thousands are not easily heard and for the first few weeks their efforts were not really catching on. However, good ideas have a way of succeeding and by the round four match against Hawthorn a quiet but discernible noise could be heard on the TV replay. It was not loud enough to get the public's attention, but many of the regulars in front of the press box could hear it and liked the idea.

The breakthrough came in the round seven game at Princes Park against Geelong. In what was a convincing ten goal win to the Blues. Perovic only gathered a handful of kicks for the game, however the mood of the crowd was buoyant with the big win against strong opposition and as the game progressed the "Woof" became louder and louder. It was in this game that Val Perovic himself began to notice the noise coming from the crowd every time he kicked the ball.

The media noticed at this stage as well but the "Boof" was interpreted as a "Woof" and from that time forward the moniker would stick (although Mike Coward did refer to Val "Boom" Perovic in a game review for The Age after the Geelong game). Round eight saw a loss at the Western Oval and Val did not play in the round nine thrashing of South Melbourne. Thus it was in the round ten game against Richmond where the "Woof" became a phenomenon. It was loud and proud throughout the entire game and the supporters at Princes Park had become hooked on the "Woof".

After a while the "Woof" would take off to such an extent that it seemed as though Val's kicks were travelling an extra ten metres on the power of the crowd alone. Of course the legend has lived on most notably through the efforts of Ang Christou and later Chris Bryan. Tradition demands that the legend must live on, Frank Andreula, one of the six originators of the call reckons that either Josh Bootsma or Matthew Watson are the most likely candidates on the Blues current list.


These little snippets provide some interesting history to the formation of the catchcry: 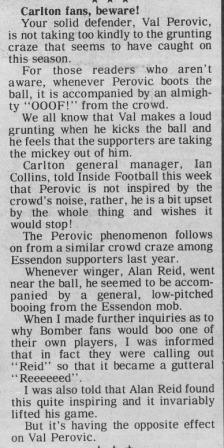 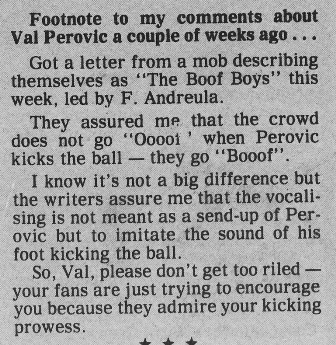