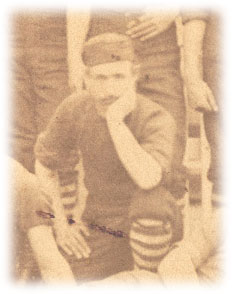 1875 July 21
E. Coventry played for Fawkner against Richmond and scored the only goal of the afternoon.
This was reported in the Telegraph, Prahran, St. Kilda, South Yarra Guardian July 24.
The Fawkner Football Club would have been associated with Fawkner Park in South Yarra where a number of football teams played. Not to be confused with the suburb Fawkner in Melbourne's north.

1875 September 18
E. Coventry was named vice captain of the South Yarra Standard Cricket Club. (Both E. & Alick Coventry were named on the committee.)

1876 March 27
At the AGM of the South Yarra Standard Football Club, E. Coventry was named as captain, and there were two players named Coventry on the committee.

New recruit in 1881 from Southern and did well.
(Centenary Souvenir of Carlton Football Club p15)
Coventry and F. Ashton both tranferred from Southern in 1881.

1881 June 25
Edward scored one of Carlton's two goals in their win over Essendon at Princes Oval.
"Finally, as the time for finishing was drawing near, the Carlton men made a grand dash down the centre, the elder Coventry at its close playing to his brother Edward, and the latter, by a good running kick, secured the second goal for Carlton." (Australasian July 02 p13)

1881 Like his bother Alick Coventry showed excellent qualities as a wingman speedy and sure, his retirement in the middle of the season was a loss very much felt.
(The Footballer 1881, p23)