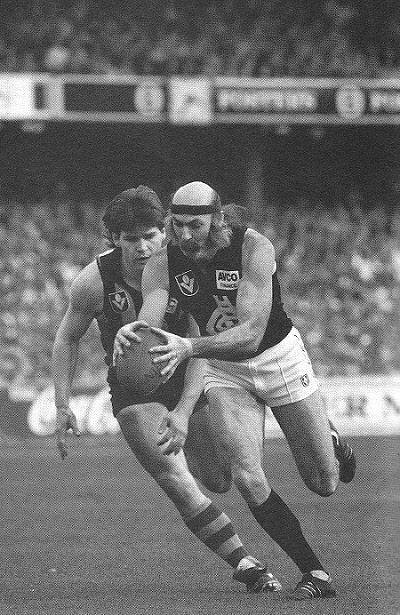 By any measure, Bruce Doull was a champion. One the greatest defenders ever to have played the Australian code of football, he racked up a club record 352 matches for the Navy Blues (including six Grand Finals for four flags) in a 17-year career that stretched from 1969 to 1986. He was Carlton’s Best and Fairest four times, and a member of both the AFL and Carlton’s Team of the Century. It’s a curious fact, however, that we know comparatively little about him. An intensely private person, Bruce shunned publicity and rarely gave interviews. Instead, he let his football do the talking - by taking on and beating the best forwards in the game, week after week.

Born Alexander Bruce Doull in Geelong in 1950, he was recruited by Carlton’s Under-19 squad in 1968 from the Jacana Football Club in Melbourne’s northern suburbs. In those early days he was a ruck-rover or half-forward, with a conservative haircut and a burning ambition to be a League footballer. The Blues were the reigning premiers, and the club’s roster was rich in talent across all three grades. Even so, Bruce played only a handful of games with the Under-19 squad (in guernsey number 53) before he was promoted to the Reserves and allocated the highly-prestigious number 4.

Then, in only his second season at Princes Park, the shy youngster was selected to make his senior debut for Carlton in a home-ground match against South Melbourne in round 5, 1969. He sat on the reserves bench throughout the first half that afternoon, before being called on to replace the injured Alex Jesaulenko at half-time. Once on the field, Bruce made the occasion even more memorable by kicking his first career goal early in the third quarter, and Carlton held off the fast-finishing Swans to win by 25 points.

Throughout 1969-70, Doull played another 14 matches as a winger, ruck-rover or half-forward. He was overlooked for a finals berth in both seasons, but mid-way through 1971, senior coach Ron Barassi told him that there was a regular spot available in defence if he wanted it bad enough, which Bruce certainly did. Given an opportunity to impress at half-back, his judgement, deceptive pace and strength in the air stood out, as did his remarkable poise and calmness under pressure.

At 185 cm and 87 kg, Doull was no giant. Yet he soon demonstrated a remarkable ability to "play tall" in a key defensive role. And when the ball came to ground, he stayed in the contest because he never lost his concentration. His all-round agility was exceptional - making him equally as effective in a pocket or on a flank - and physical pressure rarely unsettled him. 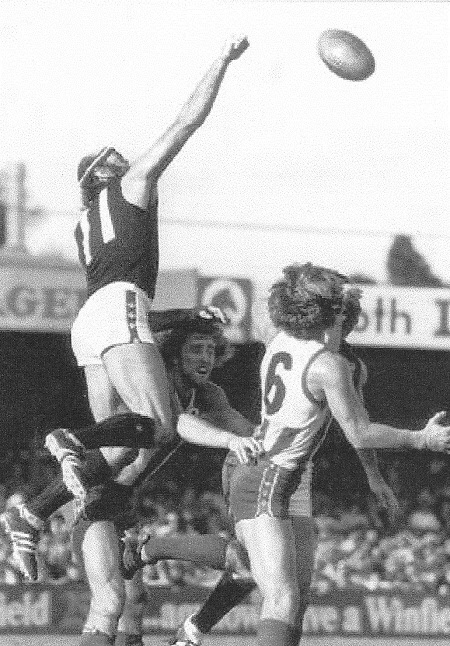 In his 53rd senior appearance for Carlton - the 1972 VFL Grand Final - Doull stamped himself as a rising League star by subduing Richmond’s champion centre half-forward Royce Hart on the biggest stage of all. The Tigers kicked a huge 22.18 that afternoon, but Carlton booted 28.9 in the highest aggregate decider ever played, and collected an eleventh VFL Premiership. Hart was kept to just a handful of possessions and two goals for the match, so the media was soon clamouring for information about the Tiger star’s conqueror. Bruce complied, but he was uneasy in the spotlight and from then on was rarely available.

At the same time, Doull had become the latest folk hero at Princes Park. Supporters loved his no-nonsense approach, his courage and his consistency. In keeping with his shy nature is the story of his playing numbers. More and more during his first three seasons in number 4, he was uncomfortable in the locker room because of the attention that was focused on him, in the presence of some of the club’s modern greats like Serge Silvagni (number 1), John Nicholls (2), Kevin Hall (3), Syd Jackson (5) and Garry Crane (6). Therefore, at the conclusion of the 1971 season he was granted a request to switch to guernsey number 11, which had become available due to the retirement of another idolised Carlton defender in John “Ragsy” Goold. With his new number, Bruce shifted only a few metres down the line of lockers, but for him, anywhere further from the limelight was appreciated.

By his mid-twenties, Doull was sporting lavish sideboards and hair to his shoulders, which contrasted somewhat with his shy nature, and made him hard to mistake on the field. He won Carlton's Best and Fairest award in 1974, and followed up again in 1977, 1980 and 1984. In 1979 he collected his second Premiership medal when the Navy Blues knocked over Collingwood in a hard-fought, controversial Grand Final remembered for Wayne Harmes’ brilliant solo effort to seal the match. Two years later, Bruce’s finest hour arrived when the Blueboys broke myriads of Magpie hearts again to win the 1981 Grand Final by 20 points. Impassable all day at centre half-back, Doull beat four opponents, and was a worthy winner of the Norm Smith medal as Best on Ground.

Twelve months on from that triumph, Bruce collected his fourth Premiership medal when the wounded Blues upset their other traditional rival, Richmond, for the '82 flag. By then nicknamed the “Flying Doormat” by TV commentator Lou Richards - in deference to his balding pate, shaggy beard and hair, kept under control by a navy blue or white headband - Doull led a Carlton defence that was rock-solid in the Blues' 18 point win. Although he would not have been overly concerned, plenty of good judges were gobsmacked afterwards when Bruce missed out on his second Norm Smith medal, which went instead to Richmond's Maurice Rioli.

From 1976 to 1981, Bruce was a fixture in the Victorian State team, and earned a recall in 1984 at the age of 33. He was a remarkably durable and suffered a debilitating injury only once in his career, in 1985 – shortly after he had set a new games record at Carlton of 329 matches to succeed John Nicholls. He wrenched a knee at training a few days later, and ended up playing only three senior games for the season.

Eventually, Doull made 356 appearances for Carlton, including 162 in succession to set another club record. He was never reported by the umpires for foul play, and widely respected for his fairness in playing the ball rather than the man. A former team-mate, Brent Crosswell once wrote: "Doull's game has a moral purity about it, and that is why opponents have always found it extremely difficult to be unfair to him. It would have shamed them." Carlton Coach of the Century David Parkin was equally as complimentary when he described Bruce as “the best team player I ever coached.”

Doull’s final game for Carlton came in the sixth Grand Final of his career, when Hawthorn demolished the Blues in a one-sided 1986 decider. Star Hawks full-forward Jason Dunstall kicked six goals on the 36 year-old veteran in that match, but in the context of Bruce’s career as a whole, it was barely a blemish.

He may have been a shy and reserved individual in public, but when Bruce Doull pulled on the famous Old Dark Navy Blue, he became one of the true legends of VFL/AFL football. Just one year after his retirement, Bruce was elected to the Carlton Hall of Fame. In September 1996 he was named on a half-back flank in the AFL Team of the 20th Century, and in 2000 filled the same spot in Carlton's Team of the Century.

Then, in June 2014, during celebrations marking Carlton's 150th year of VFL/AFL competition, Bruce was named as one of the five greatest Blues of all time, alongside John Nicholls, Stephen Kernahan, Alex Jesaulenko and Stephen Silvagni.

On the way to victory in the 1982 Grand Final against Richmond, Doull was involved in a celebrated incident that stopped the game and both amused and infuriated the 107,536 fans at the ground. During a tense third quarter, Carlton was in front by one point when a naked female dashed out into the middle of the MCG. Wearing nothing but a Blues scarf, 18 year-old Helen D’Amico made a bee-line for Doull, and tried to embrace him before she was intercepted by his team-mate Wayne Johnston and disturbed match officials. With the crowd in uproar, she was bundled into an over-sized cardigan and marched off the ground, as Carlton went on to upset the Tigers by 18 points. It later emerged that Ms D’Amico had been working as a strip-tease artist at an Adelaide nightclub, and her streak was a publicity stunt.