JOHN Russo was a leading umpire in the 1980s and 1990s. Not many players liked him and the Carlton fans were emphatic he had a set against our glorious Blueboys. He also had a very fragile ego. 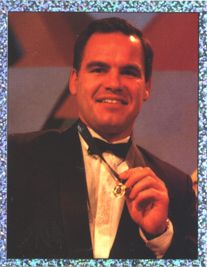 One day in 1996, Russo – then retired – displayed he had an ego as tough as an eggshell. Now Carlton supporters still remember and loathe Russo as THE MAN WHO COST DIESEL THREE BROWNLOWS. As legendary Carlton supporter and noted author Tony De Bolfo wrote in the Herald Sun in 1993 after Diesel had missed out by one vote from joining the exclusive three-George’s club “Forty four possessions that counted for nothing”.

Although there were two umpires officiating in the match where Diesel was Michelangelo-like using Princes Park as his canvas, Russo was the senior umpire. Apparently, Diesel, as was his want, had had a running verbal battle with Russo most of the day and it appears likely, neigh certain, that Russo punished The Cheezel for having the temerity to question his umpiring abilities as in “no Brownlow votes for you today Diesel”. Talk about vindictive. Poor Johnny had copped a few sprays from one of the 21 best footballers of the 20th Century and was very weak-jawed and mealy-mouthed about it. But he was a vengeful bugger.

Crikey mate, you should have considered yourself lucky to be umpiring in a game featuring one of the all-time greats giving a virtuoso performance. Every person at the match and on the ground marvelled at Diesel’s performance that day – players and spectators alike. And it wasn’t one of his best. That came in the 1995 GF when he slotted five, gathered a lazy 31 possies and gave away or created numerous other goals in that wondrous victory.

I wonder what would have happened if Russo was on the Norm Smith Medal voting panel that day! But back to 1996. The Blues were about to strut their stuff so stylishly at the Colosseum of Champions – our beloved Princes Park. Our crew were standing in front of the mighty heritage-listed Gardiner Stand. Although we had reserved seats, we always stood – just as well as were pretty demonstrative. But when you support the mighty Bluebaggers, why wouldn’t you be?

The crew included Tesco, Big James, Silly (who although he lived in the high desert of California was always there in spirit), mighty Maureen and Pete the Pol who hated unions almost as much as he hated Collingwood. I was chatting away with one of my mates when who should come walking through the crowd but one John Russo.

I simply couldn’t resist the opportunity. “There’s the bloke that cost Diesel three Brownlows,” I said in a tone designed specifically to catch Russo’s attention. He got about three yards by and his wife said to him: “Did you hear that?”. He nodded and strode directly back to me and was in my face ranting his head off. “I umpired over 200 games, I umpired three grand finals, I did this, I did that,” he ranted away red-faced. Now normally you would think a comment from some wag in the outer would be water off a duck’s back given Russo’s “achievements”. But not this bloke, nor his wife for that matter as she chimed in with her two bob’s worth. This went on for about two minutes and Russo, such was his rage, he didn’t realise that anyone within earshot were laughing there heads off at his silly attempt to defend himself as his jugular vein reached Parkin-like proportions. Not only that, other supporters joined in giving him heaps not only about Diesel but the way he had umpired Carlton games.

The bloke finally came to his senses and was about to storm off when I said: “But John you didn’t address the issue about Diesel’s Brownlow.” This brought tears of laughter and it also brought Russo to the realisation he had made a complete gig of himself and should have ignored the comment altogether. I think this was around the time Channel 7 had introduced that stupid “fourth umpire” as part of it’s commentary team. I’ll never forget watching a Friday night game on the box and Russo gave his interpretation as to why a player didn’t get a free kick when he was clearly and illegally taken out of a contest. Russo babbled on about this and that and Tim Watson jumped right on him and said: “You umpires. You have absolutely no feel for the game.”

Disclaimer: The views and opinions expressed in this article are those of the authors and do not necessarily reflect the policy or position of the Blueseum.