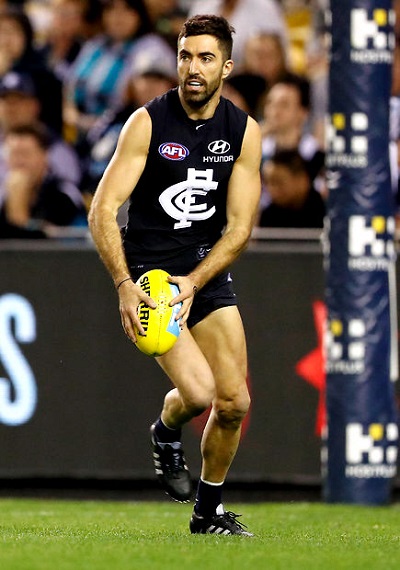 A gifted, committed player whose early years at Princes Park were overshadowed by some of the most tumultuous events in the history of the Carlton Football Club, Kade Simpson emerged as both an elite midfielder and one the Blues’ very best on-field leaders. During his first two seasons he was dubbed 'Slimmo,' because of his jockey-sized frame, but that didn’t hinder his tenacity, or his raking left foot. And since then, his consistently effective link-up role around the ground has made him a favourite son of the Old Dark Navy Blues.

Simpson was originally pencilled in as Carlton’s third selection (number 45) in the The 2002 National Draft. Barely 24 hours beforehand however, the AFL Commission announced that the Blues had been found guilty of breaching the League’s salary cap rules. As a consequence, they handed very heavy penalties, including fines of almost a million dollars, the loss of early-round and priority picks in the National Draft, and disqualification from the 2003 Pre-Season Draft altogether. It was a savage blow to a proud club, and it almost spelt oblivion.

In the aftermath of those events therefore, Simpson became Carlton’s first draft selection. A goal-kicking wingman from Emerald in Melbourne’s outer east, he had impressed the Blues recruiting team while playing with the Eastern Ranges in the elite TAC Cup Under-18 competition, and the Blues were certain that if he could add some bulk and strength to his somewhat immature frame, he definitely had a future in the game. As an indication of that confidence, Simpson was allocated guernsey 6 – the number worn previously by the likes of champions Garry Crane, Bob Chitty and Ern Henfry.

Kade spent the first half of 2003 in the red and white colours of Carlton’s VFL affiliate, the Northern Bullants, although it didn’t take long for him to start pressing his claims for a senior berth. Surprisingly good in the air and a terrier after the football at ground level, he demanded elevation, which eventually came in round 11, 2003 at Docklands, when Carlton met Geelong and were beaten by 40 points. Simpson was sparingly used off the interchange bench, and didn’t trouble the statisticians – a scenario that was repeated twice more that year; in round 12 against Richmond, and round 19 against Adelaide.

In 2004, the situation was much the same; lots of developmental games with the Bullants, interspersed with three senior appearances off the bench. In the first of these – against the Adelaide Crows at Football Park in round 11 – Simmo kicked his first career goal, in a game highlighted by Carlton full-forward Brendan Fevola’s magnificent, match-winning 50-metre after-the-siren goal from hard up on the boundary line.

By 2005 Simpson had reached new heights of strength and fitness, and quickly showed the benefits. He started from the bench in the Grand Final of the pre-season Wizard Cup, and celebrated a good win over the West Coast Eagles by 27 points. During the season proper, he played 15 games - mainly at half-forward - and booted 9 goals. In round 18, he played his best game to date and won himself a Rising Star nomination when the Blues beat arch-rivals Richmond by 35 points at Docklands Stadium.

However, that was just a preview of stage 2 of his career, which began with Kade’s breakout season in 2006. While the Navy Blues languished at the foot of the AFL ladder, Simmo was one of his ailing club’s shining lights. He didn’t miss a match all season, averaged 19 possessions and six marks a game, and his bold running prompted national coach Kevin Sheedy to select him in the Australian International Rules team for the tour of Ireland. Topping off a memorable year, Kade then finished a creditable fourth in Carlton’s Best and Fairest award, behind Lance Whitnall, Brendan Fevola and Heath Scotland. 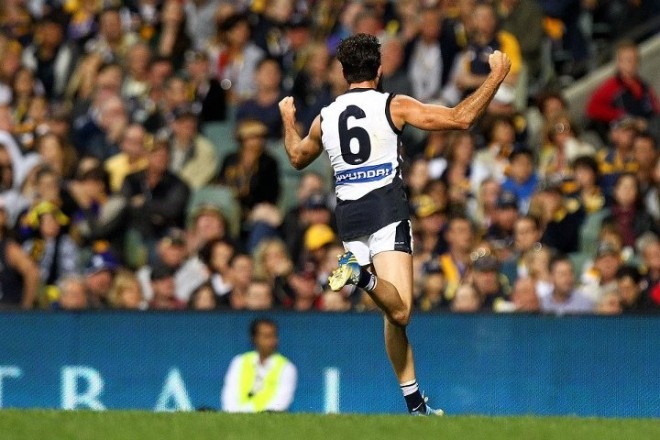 Season 2007 was more of the same, as the painful process of rebuilding a badly-damaged club continued. Carlton won another pre-season Premiership, during which Simmo was elevated to the team’s leadership group, and his 22 matches overall produced 17 goals. He played his 50th senior game against Collingwood in round 7, and his growing stature was confirmed when he was appointed captain of the Blues for round 14, in the absence of his injured skipper Whitnall. Kade responded with a best on ground performance in that match, and did all that he could over the next six weeks until ‘Big Red’s’ return in round 20. Unfortunately Simpson's reign as captain resulted in six straight losses, but for the second year running he finished among the top five in the Best and Fairest.

After six bleak seasons that produced three wooden spoons, the Carlton Football Club received a huge lift in 2008, when former West Coast Premiership captain and Brownlow Medallist Chris Judd returned home to Victoria to join the Navy Blues. With Judd’s presence in the midfield, Simpson became even more effective, averaging 19 disposals per game as the Blues climbed from second-last in 2007 to eleventh. After gaining yet another top ten Best and Fairest placing, Kade headed off to Ireland on another International Rules tour, and came home a few weeks later with the Jim Stynes Medal around his neck as the outstanding player of the series.

When Simmo played his 100th game for Carlton against Essendon in front of 83,000 fans on a Friday night at the MCG in round 13, 2009, it should have been a joyous occasion, but it wasn’t – the Bombers established superiority early in the game and won by 69 points. Despite that big loss (and one or two others like it during the year), Carlton climbed back into the top eight and stayed there until the finals rolled around. Kade then experienced his first AFL Elimination Final when the confident Blues travelled to Brisbane to play the Lions on a balmy Saturday night at the Gabba. With their number six busy at half-forward, Carlton led by 24 points at three-quarter time, before the visitors ran out of legs in a hectic last ten minutes, and were beaten by an agonising 7 points. The only consolation for Kade after that was the completion of another injury-free year, and another top ten placing in Carlton’s Best and Fairest.

Almost precisely 12 months later, Carlton lost another emotion-charged Elimination Final by 7 points to Sydney at Homebush Stadium. In one of the games of the year, the young Blues gave their all in another cracking last-quarter contest, but couldn’t find the goals when it mattered most. Simpson was a livewire as always at half-forward, and although bitterly disappointed, marked his eighth year of AFL football with his fifth Best and Fairest top ten placing.

Kade’s 2011 was another season of milestones and personal records. Again he didn’t miss a match, and in round 18 at the MCG, he played his 150th career game when the Blues destroyed Essendon. In the first week of the finals, Carlton shot down the Bombers again in a one-sided Elimination Final, and Simmo enjoyed a double celebration when he racked up his 143rd consecutive game to overtake Jim Francis in second place on Carlton’s most consecutive games list. The following Saturday, the Blues went down to West Coast by 3 points in a desperately hard-fought Semi Final at Subiaco.

Simpson’s charmed run of injury-free matches eventually came to an end in round 15, 2012 while the Blues were well on the way to defeating ladder-leaders Collingwood on a Friday night at the MCG. During the third quarter, Kade stretched up for a mark, only to be smashed into - front on - by an opponent coming hard the other way. That sickening impact knocked Simpson out cold, broke his jaw, and halted his tally of consecutive matches at 158 – just four less than legendary defender Bruce Doull.

Early diagnosis had Kade condemned to the sidelines for at least a month, and in his absence Carlton’s season – already wobbly – crashed in ruins. Although he courageously resumed after missing only three matches, the team’s finals hopes were already shot, and Carlton was sliding toward an eventual 12th place finish. The sacking of coach Brett Ratten, followed by the pre-Christmas resignation of the captaincy by Chris Judd, added an unhappy postscript to one of Carlton’s most disappointing seasons.

Hope springs eternal however, so the somewhat controversial appointment of former Collingwood and West Coast Premiership coach Mick Malthouse as senior coach made the club a viable contender for the 2013 flag. Early on, Simpson was regarded as a strong candidate for the captaincy under Malthouse, but eventually was overlooked in favour of Marc Murphy. 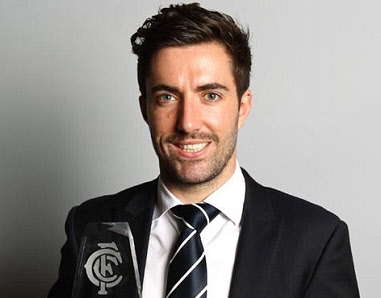 Like his club as a whole, Kade got off to a slow start in 2013, although by the mid-point of the season he was back to his ball-winning best – resplendent in a lush bushranger-style beard that eventually raised $32,000 for charity when it was shaved off in September. Carlton finished ninth, only to be sensationally promoted into the top eight when Essendon was found guilty of bringing the game into disrepute and disqualified from participation in the finals.

Once again, Simmo was a star in both of the Blues’ September assignments – a gutsy Elimination Final victory over Richmond, then a sense-defying Semi Final capitulation to Sydney on the shifting surface of Homebush Olympic Stadium. The latter was his 200th senior game, and after averaging 23 possessions in each final, Kade capped another excellent season as a clear winner of the 2013 John Nicholls Medal.

Blues fans were confident when the 2014 season began, but the team rarely fired on all cylinders and struggled through the season to finish 13th. Still, Simpson remained a model of consistency. After playing all 22 games to average 23 disposals and 6 marks per match, he kept his standing among the elite of the AFL when he polled strongly again in Carlton’s Best and Fairest to finish third behind Bryce Gibbs and Marc Murphy.

A busy off-season trade period saw Carlton began 2015 with plenty of optimism, before three heavy losses in the first four rounds raised the curtain on one of the worst years in Carlton’s history. By mid-year the Blues had been decimated by injury, champion Chris Judd had been forced into retirement and Malthouse had been sacked as coach. And after being regularly pummelled throughout 18 of the 22 rounds, the shell of a once-great club earned the humiliation of a fourth wooden spoon. Only a handful of Blues enhanced their reputations during that horrendous six months, and Simpson was one of the first to come to mind. In 20 matches under siege across half-back, he maintained the same average stats as the previous year – 23 disposals and 6 marks per game – to once more underline his character, his dedication, and his enormous value to the team.

Ahead of the 2016 season, Carlton chose former Hawthorn assistant coach Brendon Bolton to succeed Malthouse, and the Blues surprised by winning six of their first eleven games, including Simmo’s 250th – a hard-fought 2-point victory over Port Adelaide at Docklands in round 8. Kade was at his resolute best in each of those matches, and assumed the extra responsibility of leading the team again after Marc Murphy suffered ankle damage in round 10. Although the Blues lost all but one of their last 11 games, Simpson led by example and continued to set standards for commitment and consistency. Gathering 27 possessions, 7 marks and 5 defensive-50 rebounds per game, he finished runner-up to Sam Docherty in voting for the John Nicholls Medal, and thrilled the club by agreeing to play on in 2017.

Now in 2019, Simpson is seeking some success in his 17th year of AFL football...