A single game...in the M&M Guernsey! 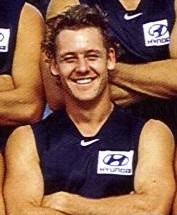 Andrew Balkwill came to Carlton as part of the Brent Heaver trade at the inception of the Port Power Football Team. The Blues traded away Heaver and sought Ben Nelson- 1999 Grand Final player- together with Balkwill in return. Balkwill was originally from Central Districts

Balkwill, a 192cm blond haired mobile tall, played just a solitary game for the Blues in Round 3, 1997 against Adelaide but would have the unique distinction of being the only player in Carlton history to have played senior football without donning the famed Old Dark Navy Blue. For this game was the one where Carlton wore light blue as part of a Sponsorship Deal with M&M! He remained on Carlton's list for 2 years: 1997-98 but other than the one senior game would spend all that time in the reserves. Balkwill headed back to SANFL club Central Districts for the 1999 and 2000 seasons. he retired at the end of 2000 due to injury problems.

Andrew is one of those horribly unlucky yet also amazingly lucky players to play a solitary game for Carlton.