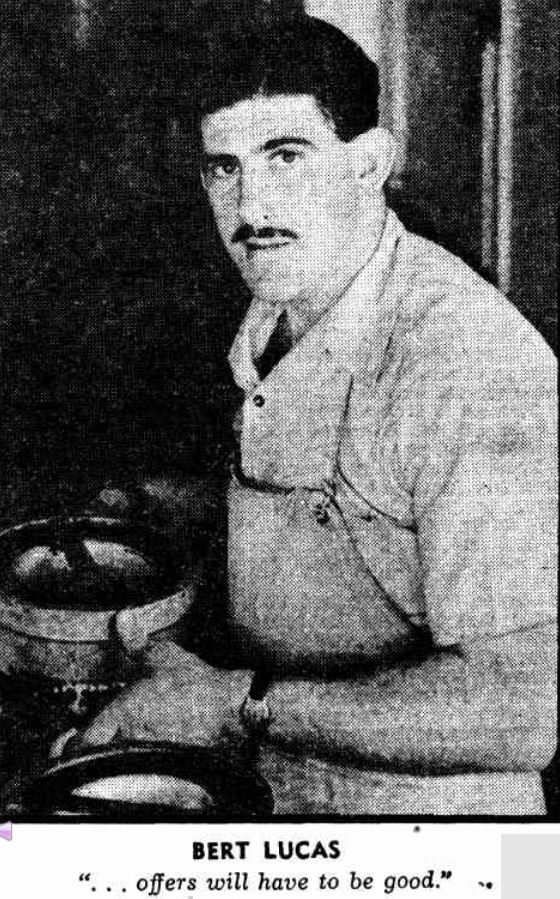 Certainly one player deserving of a place on Carlton’s list of those who got away, Albert William (Bert) Lucas played seven handy matches as a follower-forward with Carlton in 1944, immediately after serving his country in World War II. Two years afterward, he re-emerged at South Melbourne, where his 69 appearances and 31 goals over four years were highlighted by one season as captain of the Bloods in 1949.

Lucas who was born in Collingwood, showed the first glimpses of his ability at VFA club Sandringham in 1940. World War II had begun the previous September, when Bert was already a member of the Australian Militia (or Army Reserve). Because he was able to live at home in nearby Brighton most of the time, he managed 15 games in with the Zebras in 1940 and ’41, and soon attracted Carlton’s interest. But it wasn’t until 1944, when he transferred to the RAAF, that he was able to have a serious crack at VFL football with the Blues.

Lucas made his senior debut against Richmond at Princes Park in June 1944, and played his last match against Essendon at Windy Hill in August. He wore guernsey number 22 throughout, and kicked 5 goals. The reasons why he severed his ties with Carlton were not recorded.

South Melbourne certainly reaped the benefits of Lucas’s defection, and ended up with a ‘two-for-one’ deal when Bert’s brother George played four games and kicked one goal for the Bloods in 1947. Even so, South never looked like making the finals during Lucas’s time at the Lake Oval, while Carlton went on to far greater on-field success; claiming Premiership glory in 1945 and 1947.