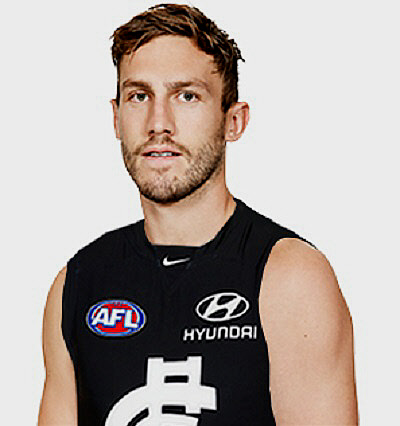 
Twenty-four year-old midfielder Billie Smedts came to Carlton in 2016 after the Blues’ resolute defender Zach Tuohy was reluctantly granted a trade to Geelong. In a stark contrast, Tuohy had not missed a game since the start of the 2013 season, while Smedts had endured an injury-ravaged stay at Kardinia Park since being picked up by the Cats as their first-round draft selection in 2010.

Smedts’ pathway to the AFL led from the North Warrnambool Eagles to TAC Cup football with the Geelong Falcons. His assessment at the 2010 draft combine was outstanding, and it came as no surprise when was picked up by the Cats with their first call at number 15. Billie made his senior debut for Geelong against Fremantle in round 1, 2012, but over the next four seasons a series of injuries restricted him to only 38 appearances.

A broken leg in 2014, then a broken collarbone and shoulder reconstruction in 2015 was bad enough, but when he fractured his other leg in June 2016, Billie must have wondered whether the football gods were conspiring against him. Therefore, when he was offered the opportunity of a fresh start at Carlton, Smedts was ready for the change. The Blues sent Tuohy and their 2017 second-round draft selection to Geelong, in exchange for Smedts, the Cats’ number 63 pick in 2016, plus their first-round selection in 2017.

After playing 9 games for the Blues in his first year with the Blues Smedts was delisted, Smedts headed to GFL club Leopold for the 2018 season with former Cats team-mate Tom Ruggles.

2019 - 22 - Smedts lined up with North Warrnambool Eagles in the Hampden FL.
2023 - Smedts would play with Port Colts in the Southern FL who was being coached by his former teammate Josh Caddy.