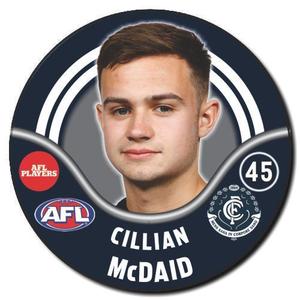 Cillian McDaid is the latest of the Blues’ international rookies ex-Ireland, Galway’s own Cillian McDaid is, like so many of his fellow countrymen, an elite kicker – and is considered a prospective defender with time and effort.

Blues sign Irish star as international rookie.
Carlton has signed Irishman Cillian McDaid to a two-year deal as an international rookie. McDaid, 20, spent time with the NAB AFL Academy on their trip to Florida in January. He also went on the trip in 2016 but missed out on being picked up. Previously a Gaelic footballer, he scored 24 out of 30 in the kicking test at the NAB AFL Draft Combine. Blues list manager Stephen Silvagni told carltonfc.com.au McDaid would likely play in the backline. "We're very pleased Cillian has agreed to join Carlton, and we think he is an exciting young prospect for our club," Silvagni said. "We have followed Cillian's progress closely throughout the year and he uses the ball incredibly well. He is a determined young man of terrific character and we feel he will be a good cultural fit for our playing group too. "Cillian is an example of the exciting young talent coming out of Ireland at the moment and has studied our game thoroughly over the past few years. "We see him as an attacking defender, but we're excited by the versatility he has shown and we look forward to seeing what he can offer." McDaid's signing continues Carlton's rich history with Irish recruits. Defender Ciaran Byrne returned from a knee reconstruction last year to play three games and bring his career tally to 15. Fellow Irishman Ciaran Sheehan was delisted in October, while former Blue Zach Tuohy enjoyed an outstanding season with Geelong in 2017. - Dinny Navaratnam.

After one season with the Blues Irishman Cillian McDaid informed the Club he has retired from AFL football. Hailing from County Galway, McDaid spent one year at the Blues and was unable to make his senior debut.