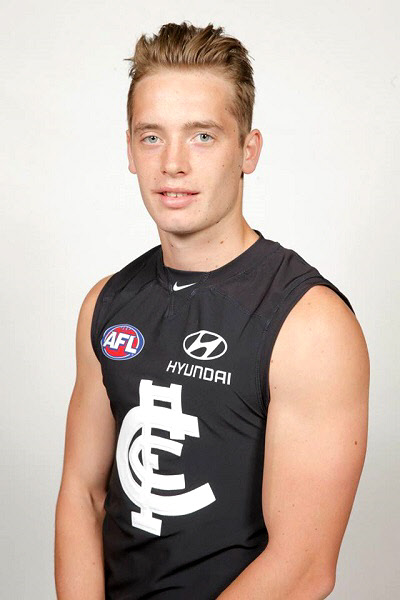 Irishman Ciaran (pronounced Keiran) Byrne was recruited by Carlton in 2013 as a Category B International Rookie. Just 18 at the time, and playing for County Louth, he was one of the Emerald Isle’s brightest young Gaelic Football stars. After agreeing to join the Navy Blues, he bid farewell to his native game by helping Ireland to big wins over the visiting Australians in both matches of the 2013 International Rules Series.

Carlton was convinced of Byrne’s potential after discovering him during a series of draft camps held throughout the Irish Republic. Having demonstrated his ability and remarkable maturity, he was persuaded to follow the path taken by dozens of other Irish converts to the professional ranks of the AFL. Carlton’s offer was sweetened by the fact that two of Ciaran’s countrymen in Zach Tuohy and Ciaran Sheehan were already at Princes Park, with Tuohy a fixture in the Blues’ defence.

Ciaran (soon nick-named ‘Casey’) spent an intense 18 months on a steep learning curve in lower grade football, and made steady progress. Despite knee and ankle strains that restricted him to 14 VFL games with the Northern Blues in 2014, by late that year he was firmly in line for promotion. He took another step forward when he was selected in Carlton’s squad for the round 1 NAB Cup Challenge match against the West Coast Eagles at Mandurah in WA in February, 2015 before being called up for his senior debut few weeks later, against Essendon at the MCG in round 3 of the premiership season.

Wearing guernsey number 38, Byrne was designated as Carlton’s substitute on that Saturday afternoon, and must have watched on with a mixture of excitement and trepidation as the game unfolded. Shortly before three-quarter time, Carlton coach Mick Malthouse decided to see what Casey had to offer, and called him into the match in place of Ed Curnow. During the next 20 minutes, Byrne racked up 9 possessions – only to then limp from the ground with a torn hamstring that was to take longer than expected to heal.

Casey returned to VFL football for the Northern Blues in July 2015, and promptly strained the same tendon again. So with another 4 to 6 weeks on the sidelines ahead of him, the club decided to put him into mothballs for the rest of the year. When he returned for 2016 pre-season training, Carlton had sacked Malthouse and appointed a new senior coach in Brendon Bolton.

Bolton and Byrne’s relationship clicked from early on, and by round 15, 2016 the dashing Irishman had played 10 of the previous 12 games to become an integral part of Carlton’s defence. Early in the last quarter of that match against Collingwood at the MCG however, he was bumped hard after taking a clearing kick, and his right knee buckled as he landed. A few hours later, he was given the news every footballer dreads when he was diagnosed with a torn anterior cruciate ligament, and scheduled for immediate surgery. It was a cruel blow for Ciaran and for Carlton, because his recovery would take at least 12 months. Even so, his trials were justified and his qualities were recognised when he was promoted to the Blues’ senior list during the off-season.

Byrne would play a further 3 games for Carlton in 2017, with various injuries getting in the way of a long run at it. Injury impacted his 2018 as well, before a run of 5 games at the end reminded us of his potential AFL value. Unfortunately that would be it for Byrne and the Blues, retiring from football after a post season return to Ireland which saw his love of home outweigh the obvious opportunity available to him. 22 games in Navy Blue, and a heap of promise.