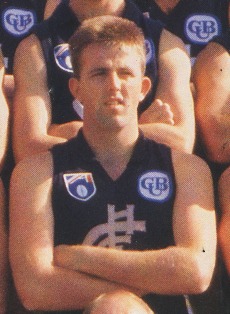 Colin Corkery was drafted from Nemo, County Cork, Ireland, with Pick 109 of the 1989 National Draft. This was the Blues 8th and final pick of that draft. Corkery played with the Blues U/19's team during the 1990 season whilst wearing the No.11 guernsey.

Corkery went back to Ireland and became a legend with Nemo Rangers playing Gaelic Football that included 4 titles with Cork, 4 Munster titles and 2 All-Ireland Titles.

Inside Football Draftee Profile - Colin Corkery
A former Irish schoolboy champion who toured Australia in 1988 with the Gaelic schoolboys team, Corkery has been touted as the best of the Irish recruits.

He did not play a senior game with the Blues.

The Blueseum is seeking additional information on Corkery.