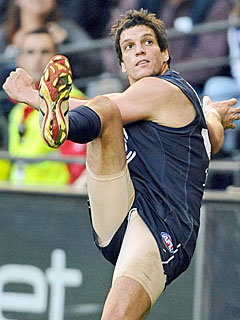 
Remembered for kicking the match-sealing goal in a famous victory by Carlton over Fremantle in 2008, South Australian Darren Pfeiffer (Carlton player number 1111) notched up 23 senior games in an injury-marred career at three AFL clubs.

A right-footed, agile midfielder who had started out with local teams Birdwood and Norwood, Pfeiffer first came under notice at the 2005 Under-18 National Championships when he was voted SA's Most Valuable Player, and named at half-back in the All-Australian team. That led to his selection by the Crows at pick 17 in the 2005 National Draft - but recurring injuries and disciplinary problems dashed his prospects, and he was delisted after two fruitless seasons.

However, Carlton saw potential in the 20 year-old, and threw Darren a lifeline by calling his name with the clubs’ first (and only) selection in the 2007 Pre-Season Draft. Wearing guernsey number 36, he made an impressive start to his career at Carlton during the 2008 NAB Cup pre-season matches, and was selected for his senior debut against Port Adelaide in round 2 of the season proper.

Stationed at half-forward, Darren played with impressive maturity to rack up 17 disposals, four marks and his first career goal with a bomb from the 50 metre line during the second quarter – an effort was all the more meritorious because Carlton went down by 40 points. He enjoyed his first win in Navy Blue in the round 4 clash against Collingwood, and was playing game number six when Carlton hosted Fremantle at Docklands in round 9. By that time, the struggling Blues hadn’t beaten the Dockers for seven seasons, and were facing a tenth successive defeat.

To the joy of most of the big crowd of 29,000, Carlton came out firing and led at half time, before Fremantle surged after the long break, and with only a few minutes left, the home team was clinging grimly to a three-point lead. It was then that Pfeiffer swooped on the football deep in the left forward pocket, and snapped a sensational goal over his shoulder to seal a great win. For days afterward, Darren was the toast of Lygon Street, but his career at Princes Park was to last just one more game. He was omitted from the team the following week, and couldn’t earn a recall until the last match of the season, when Hawthorn smashed the Blues by 78 points at Docklands.

Season 2009 turned into a train wreck for Pfeiffer after he was delisted by the Blues, then relisted as a rookie. After badly damaging a shoulder during pre-season training, Darren needed a full reconstruction and spent most of the year recovering. He didn’t play any football at all until the last month of the season, although he did earn a place in the Northern Bullants’ Grand Final side that fell to North Ballarat. It may have been understandable, but many Carlton supporters were still surprised when Pfeiffer was dropped from the list for good in September, shortly after his 21st birthday.

In an interview some years later, Darren reflected on his brief career at Carlton, saying; "My theory on football is that there's a lot of luck and timing involved. Luck involves injuries, because if you look at the guys who have long-term injuries in their first two years, not many of them last for that long. Timing - a certain club might need a player like you, or a club might be doing really well and not have a spot in your position” And in a hint about wider matters, he finished with, “It also makes a difference how well you get on with senior authority.''

After leaving Princes Park, Pfeiffer headed north to join Queensland club Southport, perhaps in the hope of being drafted by the AFL’s new club, the Gold Coast Suns. That didn't eventuate, but Darren had a sensational year and finished runner-up to his team-mate Danny Wise in the 2010 Grogan Medal for best and fairest in the NEAFL. After just one season with the Sharks, Pfeiffer returned home to South Australia, and to SANFL football with Norwood – where he recaptured his best form and was rewarded by being rookie-listed by Port Adelaide ahead of the 2012 season.

Darren made his long-awaited return to AFL football in round 4, 2012, and seemed to have established himself in an AFL side at last, when he racked up 16 games over the season. Early in 2013 however, he was struck down once more by a shoulder injury, and went under the surgeon’s scalpel for the fourth time in his career. He made it back on to the field to play at SANFL level late in the year – in time to help Norwood to another Premiership - only to be delisted by Port Adelaide in a bitter-sweet conclusion to troubled career.

In 2014, Pfeiffer moved back again to Queensland to study at university, and signed with the Redland Bombers. Later that year, he accepted an offer to coach the University of Queensland Football Club in the QAFL in 2015.

Blueseum: A summary of Pfeiffer's playing career | At both Carlton and Adelaide | Pfeiffer's Blueseum Image Gallery