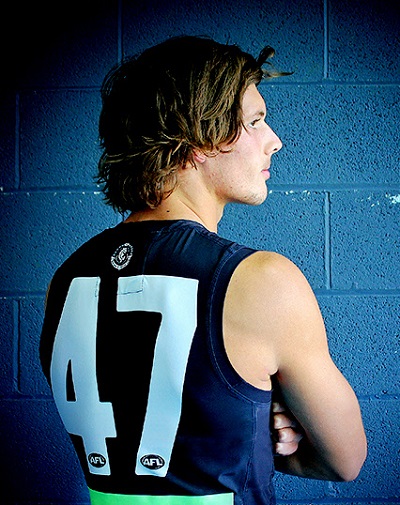 
West Australian Jesse Glass-McCasker was still just 18 when he was selected as the Blues’ number one pick in the 2015 AFL Rookie Draft. A tall key defender from Swan Districts, he had showcased his potential at full-back for WA during that year’s Under-18 National Championships when he blanketed the future number 2 draft selection, Josh Schache, during the match between Vic Metro and WA.

At Carlton, McCasker accepted guernsey number 47 and was taken under the wing of the Blues’ incumbent full-back Michael Jamison. Embarking on a steep learning curve, he played 14 VFL games for the Northern Blues in his first year, without ever really pressing for senior selection.

Then, when Jamison retired at season’s end, “JGM” requested a change to the number 40 that “Jamo” had carried with distinction through 150 games. The club was happy to comply, and some strong performances in the 2's saw him retained for a further year on the Rookie List in 2018. Given this commitment the pressure will be on for Glass-McCasker to step up to senior football.

At the conclusion of the 2018 season was delisted by the Blues, Glass-McCasker did not manage a senior appearance for the Blues since arriving at the Club through the 2016 AFL Rookie Draft at selection No.1. At the end of the season he would head back home to Western Australia and play with his original WAFL team Swan Districts. Glass-McCasker would nominate for the 2019 Mid-Season Rookie Draft in hope to rekindle his AFL career.