Carlton steamrolled St Kilda in the last quarter to win by 23 points at Princes Park.

Plucky Saints find Blues soft spots.
St Kilda seemed likely to achieve a football miracle when the Saints led by 27 points at three-quarter time against the top team Carlton at Princes Park. But the courageous Saints were not equal to the task. Again they faded under pressure in the final quarter. Carlton steadied after being on the receiving end of everything in the third quarter and slammed on 8.5 (53) to win comfortably. However, the triumph by Carlton was not convincing for a premiership favorite. St Kilda, in desperate trouble because of injuries and suspensions, was more than a match for Carlton in the first three quarters. And it is reasonable to be suspicious of Carlton's last quarter effort. Certainly the team played outstanding football.

But this could have been aided by St Kilda's gamble by using players who had not completely recovered from injuries. The Saints tried and this made Carlton's performance appear more devastating than it was. Also Carlton still has problems with its ruck and in attack. St Kilda's Brian Mynott, with some third-term help from Carl Ditterich, dominated the rucks against Carlton captain-coach John Nicholls, Peter Jones and David McKay. This is perturbing for Carlton when it is considered that these three players are big, slow moving men, who will not be helped by the faster conditions which will prevail in the finals.

Added to this Greg Kennedy is not the answer at full forward. If Carlton is to win the premiership, Ian Robertson probably will have to be played in the centre so Alex Jesaulenko can be returned to full-forward. Carlton's attack looked more effective on Saturday with Robert Walls most damaging at centre half-forward and there is no reason why he should not maintain the standard through to the finals. The Carlton defence is also holding tight but club officials wull have their fingers crossed when dashing back-pocket player Vin Waite fronts the League tribunal tonight. - Graeme Kelly; The Australian.

The ump is always right - or is he??
There were two interesting umpiring decisions given by experienced umpire Ray Sleeth. At the 23-minute mark in the third quarter Carlton captain-coach John Nicholls passed a remark to umpire Ray Sleeth. The ball was 60 yards upfield on Carlton's half forward-flank. Sleeth blew his whistle, stopped play and brought the ball back to the spot where he and Big Nick were arguing and gave St Kilda's captain Ross Smith, a free kick. A goal resulted when Carl Ditterich marked 15 yards out directly in front. I know of no rule in the book to cover the awarding of a free kick under the circumstances although the player can be reported for disputing the umpire's decision or for misconduct.

Seven minutes later, St Kilda centre half-forward, Barry Breen, marked under pressure from Vin Waite who arrived too late to knock the ball from Breen's arms. The boundary umpire reported Waite while the field umpire advanced Breen 15 yards to the edge of the goal square but did not report Waite. - Harry Beitzel; The Australian.

Our win, after being well down at three-quarter time, was very satisfying. We have been fading badly in recent games and our finishing effort against St Kilda proved that we are fit. Some of our senior players have been out of form lately but lifted their game in the final term. - John Nicholls.

And later in the quarter it was Ditterich again who marked in the goal square and goaled to boost St.Kilda to a 22 point lead. It was then that our chances looked remote, but a slight incident, in which our half forward Trevor Keogh was felled, became the turning point of the game. We lifted ourselves after that incident and came out in the last quarter full of determination to wipe off St.Kilda's lead. Peter Jones; The Age 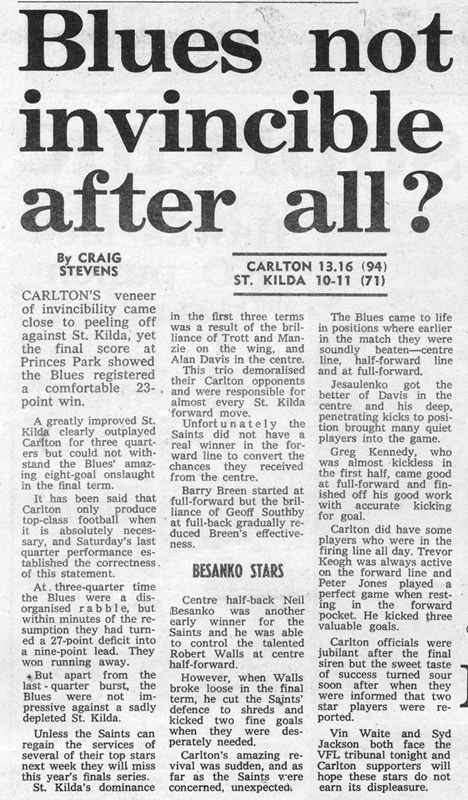