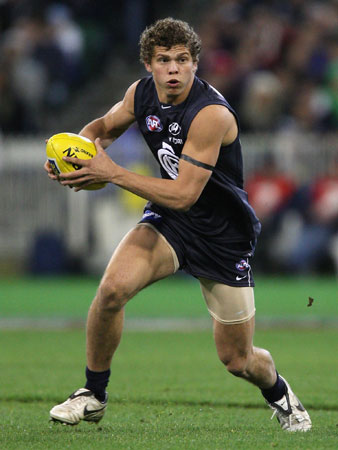 
After playing for Nightcliff and Katherine as a junior, Joe Anderson was selected by Carlton at number 67 in the 2006 National Draft from Darwin, NT. A big, hard-running defender, he was an impressive captain for the Territory at Under 18 level, before winning Darwin's Best and Fairest award in his first season with the seniors. It was said at the time that he was 'the best player out of the Territory since Andrew McLeod,’ which was high praise indeed.

At the AFL Draft Camp, Joe posted a 2.98 second 20 metre sprint time, coupled with a 14.4 beep test to demonstrate outstanding speed and endurance capabilities. A ranking in the top 5 of the Repeat Sprint Test further highlighted his potential.

Allocated guernsey number 26 by the Blues, Anderson was selected to play his debut senior match against the West Coast Eagles at Subiaco, WA in round 4, 2007. Carlton was travelling steadily with two wins and one loss at that stage, so Joe’s selection was earned on merit. Sadly for the Blues, the Eagles (led superbly by Chris Judd) totally dominated the game throughout and won by 61 points. Despite that near-humiliation however, Carlton’s selectors gritted their teeth and retained Anderson in the team for two more games – until St Kilda inflicted another heavy defeat in a Friday night clash at Docklands in round 6, and Joe was sent back to the VFL for a breather with the Bullants.

Over succeeding weeks, Carlton suffered almost continually at the hands of opposition small forwards, so Anderson found himself recalled for the round 9 match against Adelaide at Docklands. The following week, Joe strained a hamstring in a lunging tackle on Port Adelaide’s Nathan Eagleton, and from then on the remainder of his first year was a struggle against injury.

Anderson worked hard in the gym and gained 5 kilos in the pre-season of 2008. His first half of the year with the Bullants was consistently good, so he was a logical inclusion when Carlton’s new captain Chris Judd was ruled out with concussion prior to the Blues’ Round 14 victory over Richmond. He was retained for the next week’s (Round 15, 2008|match against St Kilda)), only to then be omitted again. But a recall did eventually come, and he was back with the seniors for the last two games of an encouraging season for the young Carlton side.

In 2010, it seemed that Carlton’s match committee decided on a make or break approach to Anderson’s future. He began the season in the team for round one, and stayed there for four consecutive matches, but after that, he was included only once more all year – for Carlton’s big win over Melbourne at the MCG in round 11. From then on, he spent his weekends in the red and white colours of the Northern Bullants.

Therefore, shortly after Carlton was knocked out of a pulsating 2010 Elimination Final by Sydney, the club made its intentions clear by delisting seven players, including Anderson. Although not yet 22 years old by then, Joe had managed only 17 games in four years, and Carlton’s patience had run out. Not alone in thinking that he still had something to offer, Joe nominated for the Pre Season Draft in early December, but wasn’t able to find a place with another AFL club.

Anderson's younger brother Jed was snapped by Hawthorn in the 2012 AFL Trade Period prior to the National Draft - part of a deal that saw Stephen Gilham traded to the GWS Giants in return for the Giants' Northern Territory zone selection. Anderson played 10 games with the Hawks from 2013 - 15. He was then transferred to Nth Melbourne for the 2016 season for greater opportunities.

Joey's sister Jasmine Anderson would be listed by the Adelaide Crows to represnet them in the AFLW as a rookie in 2016 for the upcoming season.

In January 2011, Joe Anderson agreed to terms with South Australia’s Sturt Football Club – moving from the Navy Blues to the Double Blues. Anderson played with Sturt for two seasons playing 38 games and kicking 4 goals. He then transferred to Nth Adelaide whereby he played from 2013 - 2018 where he played 62 games and kicked 9 goals. After an injury riddled career with Nth Adelaide he decided to retire.

Anderson’s first year back in the NT saw him play the 2017/18 NTFL season in the backline with the Darwin Buffaloes, a club which has a long lineage of players from the Anderson family.

2018 - Joey Anderson moved back to the NT to play with NT Thunder in the NEAFL. Anderson was awarded the NT Thunder Clubman of the Year for 2018, it had been over a decade since Joe Anderson wore NT Thunder colours when he captained the NT Under 18 side at national level. After a career with Carlton in the AFL playing 17 games and over 140 games in the VFL and SANFL.