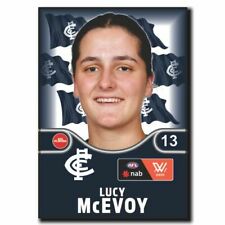 A natural leader and one of the clear standouts of the draft pool, Lucy McEvoy officially became a Blue after being selected with pick No.2 in the 2019 NAB AFL Women’s Draft. McEvoy was an All-Australian in 2019 after starring in the NAB League, the NAB AFLW Under 18 Championships (Vic Country) and VFLW competition (Geelong).

McEvoy is the cousin of Hawthorn and former St Kilda ruckman Ben McEvoy.