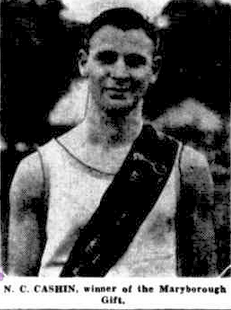 Had fate brought Prahran born Norm Cashin to Princes Park at a different time, he surely would have managed many more than 14 senior games. A talented, free-running wingman, his short tenure at Carlton was spent in the shadows of perhaps the best pair of wingers of that generation; Jack Carney and Bob Green.

Green was already well established at Carlton when Cashin was recruited from Glenhuntly Amateurs (having also played at Tarwin Lower), and Carney left Geelong to join the Blues. Carney in particular was a huge pick up. He may have been only 160 cm and 62 kg, but he was courage personified, highly skilled and a real speedster. Bob Green on the other hand was taller, more durable, just as clever and almost as quick.

Cashin was given his first opportunity at senior football in round 12, 1936 when he replaced the injured Carney and did well in Carlton’s 76-point demolition of Fitzroy at the Brunswick Street Oval. He played twice more that year, but soon had to make way when Carney returned.

In 1937 Carney missed another 11 matches, and on each occasion Cashin slotted into his position. The only time the trio played together was in what turned out to be Cashin’s last game; against St Kilda at Princes Park in mid-August. Green and Carney patrolled the wings, while Norm warmed the bench as the Blues eventually toppled a plucky St Kilda by 10 points.

Norm Cashin retired from VFL football at the end of that season. A year later, Green and Carney helped drive the Blues to yet another long-awaited Premiership with a famous victory over Collingwood in the 1938 Grand Final.

Carlton footballer N. C. Cashin (Carnegie) won the 130 yard Maryborough Gift off 11.5 yards, held on New Years Day 1937 in front of 20,000 spectators.
First Prize was £100.
The Age said that Norm "nearly broke down five yards from the tape, but recovered, and won by two feet."
Cashin a few days before had won the 220 yard Boxing Day Race at Yea, Victoria.

The above image is from Trove; The Australasian January 09

The Argus report includes the same but a poor quality image of Norm. - http://nla.gov.au/nla.news-article11953883