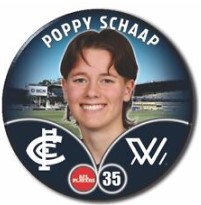 Poppy Schaap arrived at IKON Park after beginning the pre-season down the highway as a train-on player with Geelong. A supreme ball-winner with an appetite for tackling, Schaap produced an eye-catching Under-18s season for the Geelong Falcons, averaging 19 disposals, 3.5 Inside 50s, 5.5 tackles and nearly 3 clearances across her 10 games, as well as booting eight goals. The 18-year-old was also a member of the Vic Country side that won this year’s National Championships. Schaap was added to the list as a replacement player for Serena Gibbs.

Recruited from Geelong Amateur / Geelong U/18.