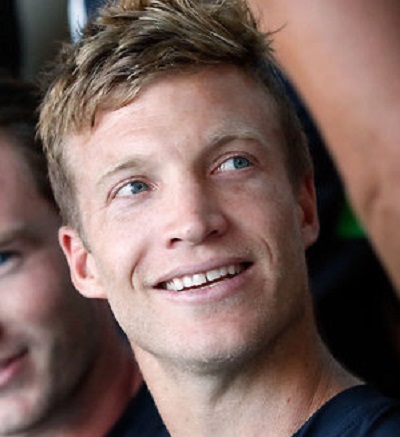 Whilst negotiating the acquisition of Caleb Marchbank and Jarrod Pickett from Greater Western Sydney during the 2016 trade period, Carlton picked up an unexpected bonus in Rhys Palmer – a 27 year-old seasoned veteran of 122 AFL matches who agreed to join Carlton in exchange for pick number 135 in the National Draft.

A West Australian by birth, Palmer had begun his career with the Fremantle Dockers in 2008 after being drafted from East Fremantle at selection number 7 in the 2007 draft. A hard-running, aggressive midfielder, he played 20 games in his first season with the Dockers, and seemed set for a long stay when he won that season’s AFL Rising Star award. However, a knee reconstruction in 2009 kept him out action for 12 months, and he couldn’t recapture his best form until his fourth season.

By 2011, Rhys had played 53 games and was out of contract. Fremantle wanted him to stay, but GWS needed grit and experience in their team and made him an offer too good to refuse. He proved a valuable asset for the Giants, playing another 69 matches over five seasons as the talent-packed Westerners developed their squadron of midfielders. That task accomplished, he saw more of a long-term future at Carlton, and landed at Princes Park in time to complete a full 2017 pre-season program.

Coincidently, Palmer played the first and only final of his career to date in his last game for GWS - the Giants’ 2016 Preliminary Final loss to eventual premiers the Western Bulldogs.

The Club mutually parted ways with 28-year-old Rhys Palmer at the end of the 2017 season.

Palmer headed back to his home state of WA to play with Swan Districts in the WAFL.