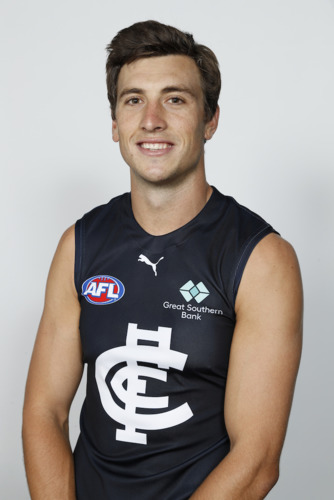 For the second year running, Carlton List Manager Stephen Silvagni raided his former club GWS during the 2016 trade period, and this time, his prized acquisition was 19 year-old Caleb Marchbank.

Originally from Benalla in northern Victoria, Marchbank already had strong family connections with the Navy Blues as a great-nephew of brothers Jim and Bill Marchbank. Jim was a star in two Premierships for Carlton (in 1906 and 1908) while Bill played 25 senior matches with Carlton and Fitzroy between 1908 and 1912.

Their descendant Caleb is a versatile tall defender who endured two injury-plagued seasons with the Giants after being recruited at number 6 in the 2014 National Draft. Knee and shoulder problems had restricted him to just seven senior games in Sydney, and by the time Silvagni approached him, he was keen to return home.

However, Carlton still had to fend off approaches from St Kilda and Essendon before Marchbank chose the Blues, and complex negotiations with the Giants stretched through until the final day of trading. Eventually, Marchbank and West Australian forward Jarrod Pickett became Bluebaggers, in exchange for a parcel of draft selections including first and second round picks in 2017. A strong 2017 followed as a defender / wingman, before a patchy - due to injury - 2018 followed. 12 games for the year, but only the last 8 when the season was over and we were struggling, showed how much Marchy struggled to get out on the park. He wasn't alone!

Marchbank is regarded as one of the brightest defensive prospects in the game. Tall, fast and skilful, he should be a huge asset for the Blues – provided that his injury problems can now be consigned to history.