Frank Marchesani made best players and kicked 4 goals for the 'Roys in this match when a rampaging Fitzroy came back from 51 points down to ultimately taste defeat in a thriller by 4 points.

Perhaps it was his performance that caught the eyes of Carlton's recruiting staff, with Marchesani joining the Blues for 1981 and beyond. More of this story is told here.

Courageous Fitzroy rover Garry Wilson was behind the Lions near defeat of Carlton and his 25 kicks earning him votes for his game on Saturday. But Carlton's Peter McConville who was the difference between the two sides with ability to take contested marks and kick important goals (three in total). McConville played a driving game on the forward line and played a huge part in achieving Carlton victory on the day. - Inside Football Player of the Year. 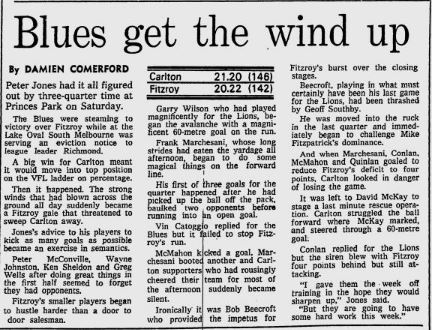