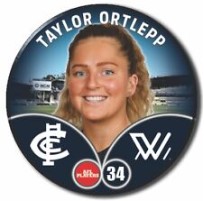 Taylor Ortlepp has signed with the Game Changers as a rookie signing ahead of season 7. Ortlepp has a background in basketball as a Point Guard having represented Australia in the U/16 Oceania Championships in 2013 and the U/17 World Championships in 2014 before signing with the Adelaide Lightning in 2015. The 24-year-old then headed to the United States to play for Boston College before returning home for a second season with the Lightning in 2020. She is currently competing in the NBA1 West competition for the Rockingham Flames. Ortlepp crossed paths with current Game Changers Jess Good and Kerryn Peterson while at the Lightning and now joins them again at the Blues.