Chris Gray the son of a east coast grazier, he was a ruckman who was originally recruited from Hutchins College, Hobart via Swansea and later Sandy Bay. He was drafed by the Blues in 1982.

Gray had been sighted by former Blue Berkley Cox which enabled him to be drafted by the Blues. Gray was contacted by the Blues and he was invited to come to Melbourne in which he did. He went on an overseas trip with the club spending 10 days in Los Angeles and 2 days in Las Vegas. He moved into a house in Pascoe Vale whilst working on a Hereford stud farm in Romsey. In 1983, all looked rosy as he had played three practice matches against Essendon, Footscray and Hawthorn. Unfortunately for Gray he became a pawn between Carlton and Sandy Bay over a transfer fee of $50,000, this couldn't be resolved so Gray headed back to Tasmania. 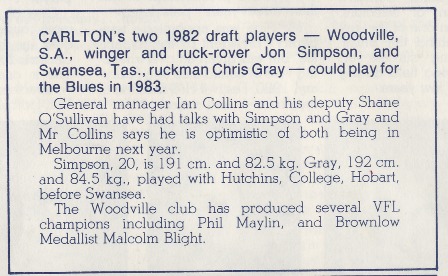