The 2008 Pre-Season began with an international exhibition match against Fremantle in South Africa, which Carlton lost by 14 points, before returning home to commence the NAB Pre-Season Cup.

Port Adelaide got away to a flying start with the first 22 points of the match but then the Blues rallied hard to score 34 points for the rest of the quarter to 1 by the Power courtesy of a supergoal by Ryan Jackson to give them a kickstart. Bryce Gibbs sealed of the quarter with a magnificient snap from 40m out after stealing the ball in congestion and evading a couple of tacklers.

During the 2nd quarter, no.1 draft pick Matthew Kreuzer kicked a great left foot goal from about 45m out with his first kick in a Carlton jumper to put the Blues back in front. The 2nd quarter belonged to Port - but only just. They'd skipped out to a 7-point lead at halftime.

The 3rd quarter was dominated by the Blues scoring 32 points and keeping Port goalless. It was highlighted by a rare goal from defender Bret Thornton - who only has 1 goal to his credit in over 100 AFL home & away games to this point - who surprised fans even further when he doubled up later in the quarter. The Blues had hit the front by 21 points.

The 4th quarter was more even but the Blues eventually got home with a win after a late threat from Port. Marc Murphy kicked a goal from just inside 50m at an important stage and then Shaun Hampson capped off a spectacular game when he converted from about 45m out to finish off any hope port had of winning.

Andrew Carrazzo was Carlton's leading possession getter with 24 disposals. Shaun Hampson, who kicked 2 goals looked extremely promising in the ruck and around the ground. Jarrad Waite, who dominated from defence; and Ryan Houlihan, who had 19 quality disposals were Carlton's best players.

Nick Stevens and Cameron Cloke also played their first official game since injury and both got through the game unscathed.


NB * Wiggins injured himself during the training session in Adelaide on the Friday before the match. Because of the size of the squad they didn't take an extra emergency, so Wiggins ran out and sat on the bench for the whole match.

Coaching: This was actually Brett Ratten's first win as Coach of Carlton.

In a pre-season where Carlton fans were looking for answers, this game only provided more questions. After a relatively even first 10 minutes, Carlton were trounced for the next 10 minutes by a dominant Hawthorn team with strong flashbacks to last year's pummelling at their hands. One view was that Carlton couldnt take its chances in those first 10 minutes; another view was that there was still much to learn. But we lost the game in the first, and then chipped away for the rest and had a far stronger third quarter, all this while field umpire Stephen McBurney was took his quarter break while 'sitting on the bench'.

This was seventh time that these two sides have met in these night/preseason matches with Carlton only winning once last season, when the game was played in Tasmania in Launceston at York Park (Hawthorn's second home).

In the last quarter two Hawthorn players were reported, the first when Campbell Brown for allegedly charging Matthew Kreuzer, (who missed his attempt at a 9 point goal after the 50 metre penalty and scored a point) and the other was Hawthorn's Josh Kennedy for allegedly forceful contact against Marc Murphy. Both of these players are third generation players with Marc's father John (at Fitzroy, South Melbourne and North Melbourne) and grand father Leo (at Hawthorn) and Josh's father John and grand father John both at Hawthorn. Although the match was over, Cameron Cloke would warm our hearts by remonstrating with Brown for his clearly dirty act. It has been a while since the Blues showed heart like this and Cloke's Collingwood / Richmond heritage was conveniently forgotten as he stood up for the young champ in Kreuzer.

Carlton would now travel and play their NAB Challenge match against West Coast in Alice Springs on Friday night February 29.

Given the game was played in Alice Springs, minimal reporting was made of the match. Carlton fans were, however, enthused by the game given senior players in Judd, Stevens, Fevola, Simpson, Waite, Houlihan, Carrazzo and Scotland were rested, and a young Blues outfit with Edwards kicking 3 took to the field. Bryce Gibbs was the carlton captain on this match. 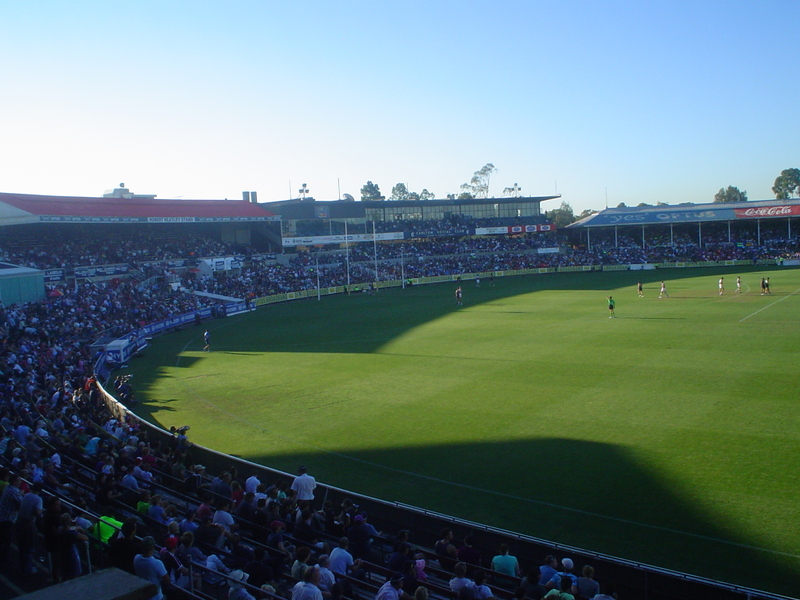 The hopes of Blues fans worldwide were raised, with boom recruit Chris Judd set to play his first game in Navy Blue. They were not disappointed, with 4 possessions - albeit a little rusty - in the first 60 seconds or so, and a nice come from behind win over the 'Dogs in the last Carlton game at Princes Park before the demolition of the Heatley Stand.

The Blues appeared to trial a few new measures in this game; a varied forward line with youngster Jake Edwards again impressing with 3 goals, Fevola and Hartlett as a true CHF. While all eyes were on Judd, young Matthew Kreuzer demonstrated his extreme potential in the ruck with an eye-opening performance.

Photos from this exciting day - and it must be said good game as well - can be viewed in the attached gallery.