A huge crowd witnessed a classic with the Blues prevailing despite South champion Bob Pratt's 10 goals.

Good signs at training on Thursday night were the strong performances from Soapy Vallence, who proved his fitness from the thigh injury suffered the previous game, and from Gordon Mackie, whose injured ankle did not appear to trouble him. Two changes were made to the side to play South Melbourne. Les Hughson and Jack Cooper were omitted and Alby De Luca, from Sandringham, and Bobby Mills, who had previously played a game for Footscray in 1929, were included for their Carlton debuts.

Today was the unveiling of the new Carlton press box which stood for 52 years on the northern wing until the erection of the Elliott Stand in 1986.

Glorious sunshine and an ideal surface at Princes Park greeted the players and spectators. The wind was gusty as the game began. Frees to Johnson and Vallence resulted in Vallence kicking a long punt for the first goal. South Melbourne replied quickly with a goal from a doubtful free. The Blues responded with some fast attacking from De Luca and Crowe, which allowed Crisp to take a fine mark. From an acute angle, his kick went through for the second goal. It was a fast high standard game, with the teams evenly matched and Carlton on top in the ruck duels. Two South goals gave them the lead, but Davey responded with a goal, following great work through the South defence by Gilby and Shea. Carlton’s team play was excellent but South were the quicker side and they were on top in marking contests. Some smart play resulted in their fourth goal and then they narrowly missed from a follow-up attack. A Carlton attack was repelled and the fifth South Melbourne goal came as the result of some great team work out of defence. It was rough, but fair play. Bob Green evaded several defenders and passed to Crowe who kicked Carlton’s fourth goal to bring the scores close, but a snap goal to South near the quarter time bell ended a most entertaining first quarter with the bloods up by eight points.

South attacked on resumption, but Gill and Hale worked well together and repelled. Shea, prominent early, passed neatly to Johnson, but his shot just missed. Perhaps due to the strong South defence, Vallence missed several easy marks in front of goal, resulting in some missed opportunities. Finally, Crowe cleverly sharked a South hit out and kicked Carlton’s fifth goal. South went forward but some silly short passing near goal allowed Gill to intercept and set up a chain of passes to give Shea his first goal. The reply from South came immediately, with ex-Blue Denis Kelleher heavily involved. Huxtable, with great play, evaded several South players and passed to Cooper who set up Shea and Pollock, which resulted in Clarke goaling. The honours were now definitely with the Blues. Carlton repelled several more attacks, due to South’s insistence in short passing, before South scored two consecutive goals, the second from a snap from future Carlton captain-coach, Brighton Diggins. Now came the finest passage of play so far, resulting in four Carlton goals. Huxtable, defending magnificently, forwarded to Shea, who evaded the South defence to kick a great running goal. The next came from Vallence and then Kelly, following a long 50 yard run, goaled. A chain of passes involving Gill, Maskell and Crisp got the ball to Vallence, whose long shot just missed, but he atoned minutes later after Shea and Johnson set him up, with no miss this time. South rallied for their tenth goal, but Carlton wasn’t finished yet, and Bob Green and Vallence combined and passed to Clarke for his second goal. Then Shea evaded some loose defence for his third and Carlton’s ninth goal for the quarter. South had been comprehensively outplayed by Carlton’ speed and teamwork in this quarter. The Blues had played wide when attacking, allowing Shea, Crisp and Crowe plenty of openings and giving a 21 point lead at the main break. Huxtable, Shea, Crisp, Green, Kelly and Johnson had played great first halves.

Carlton’s offensive continued after the break, with Shea, Kelly, Davey and Vallence combining for Crisp to kick a great running goal from the forward pocket. But South rallied with two quick goals, despite sterling defence from Gill. Carlton responded with a goal from Shea, following great work from Hale, Green and De Luca. The game had evened up and despite some excellent defence from Huxtable, South scored their thirteenth goal from a nice snap. It was goal for goal football and Carlton’s answer came when Kelly kicked to Davey who goaled from a free kick. A chain of handpasses resulted in Vallence’s fourth goal and an extension of the lead. The game had now become quite willing and Vallence was felled from a backhander. South were not giving up and were constantly attacking, resulting in two late goals and a 15 point deficit at the last change.

The final quarter commenced with some relentless attacking from South Melbourne, but Carlton’s defence was holding. Gill smothered a sure shot for goal, Gilby repelled a determined attack and Gill again saved a goal when he touched a shot as it went through. Eventually South broke through to reduce the lead to only eight points. Carlton now attacked and De Luca took a great mark, lying almost full stretch on the ground. But he could only manage a behind. Play was fierce with both sides determined to win and Johnson and Maskell were downed in strong clashes. Pollock saved in defence with a fine mark, and from the resulting attack, Carlton was able to rush through a behind. From the rebound South swept the full length of the ground but kicked out on the full. South’s attacking was relentless and they were now the quicker side, but they missed several opportunities with behinds and missing altogether when kicking for goal. The crowd was hoarse with excitement and the tension unbearable. Both sides were now dealt injury blows; South’s Diggins fractured his ankle and was carried off and Mocha Johnson, who had played himself to a standstill, limped off, being replaced by Mills. Davey took a towering mark and passed to Vallence but he kicked only a behind. Gill and Crisp came around the flank in a Carlton attack but Cooper’s shot was also astray for a behind. Carlton led by eight points when South attacked again and Pratt, the South Melbourne full forward, and Gill appeared to mark the ball together. A bounce seemed the fairest option, but to the hoots of the crowd, Pratt was awarded the mark and kicked his tenth goal for the match to reduce Carlton’s lead to two points late in the game. Frantic play brought a free to Cooper, who passed to Huxtable. His kick found Shea, who just missed to make the lead three behinds when the bell rang, to end what was described by many as the best exhibition of football played in recent years.


At the end of this round Carlton were in 3rd spot on the ladder with a percentage of 125.6. 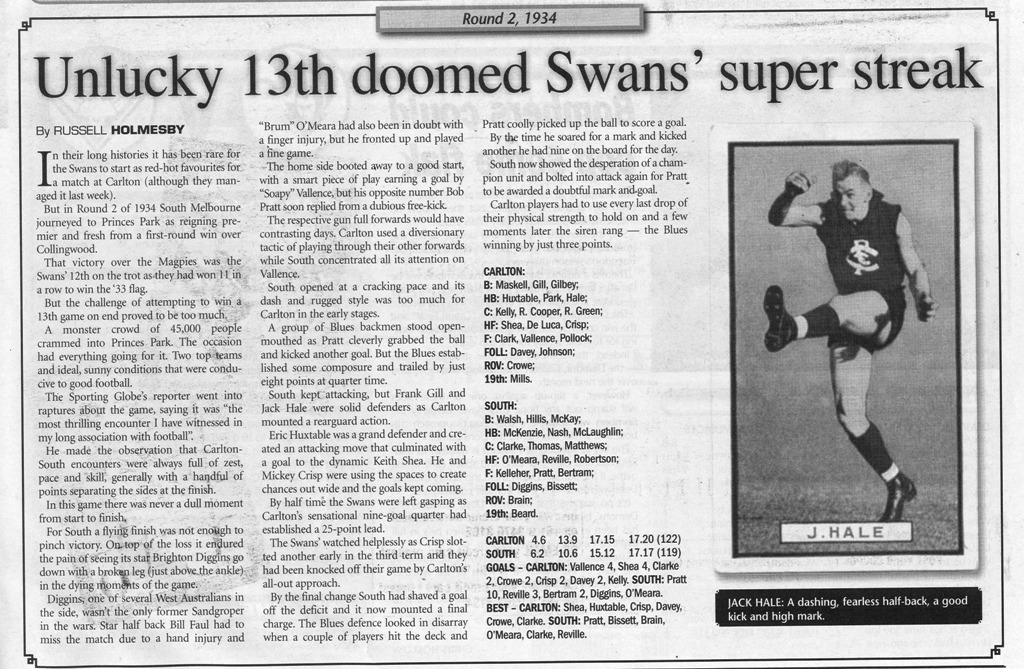 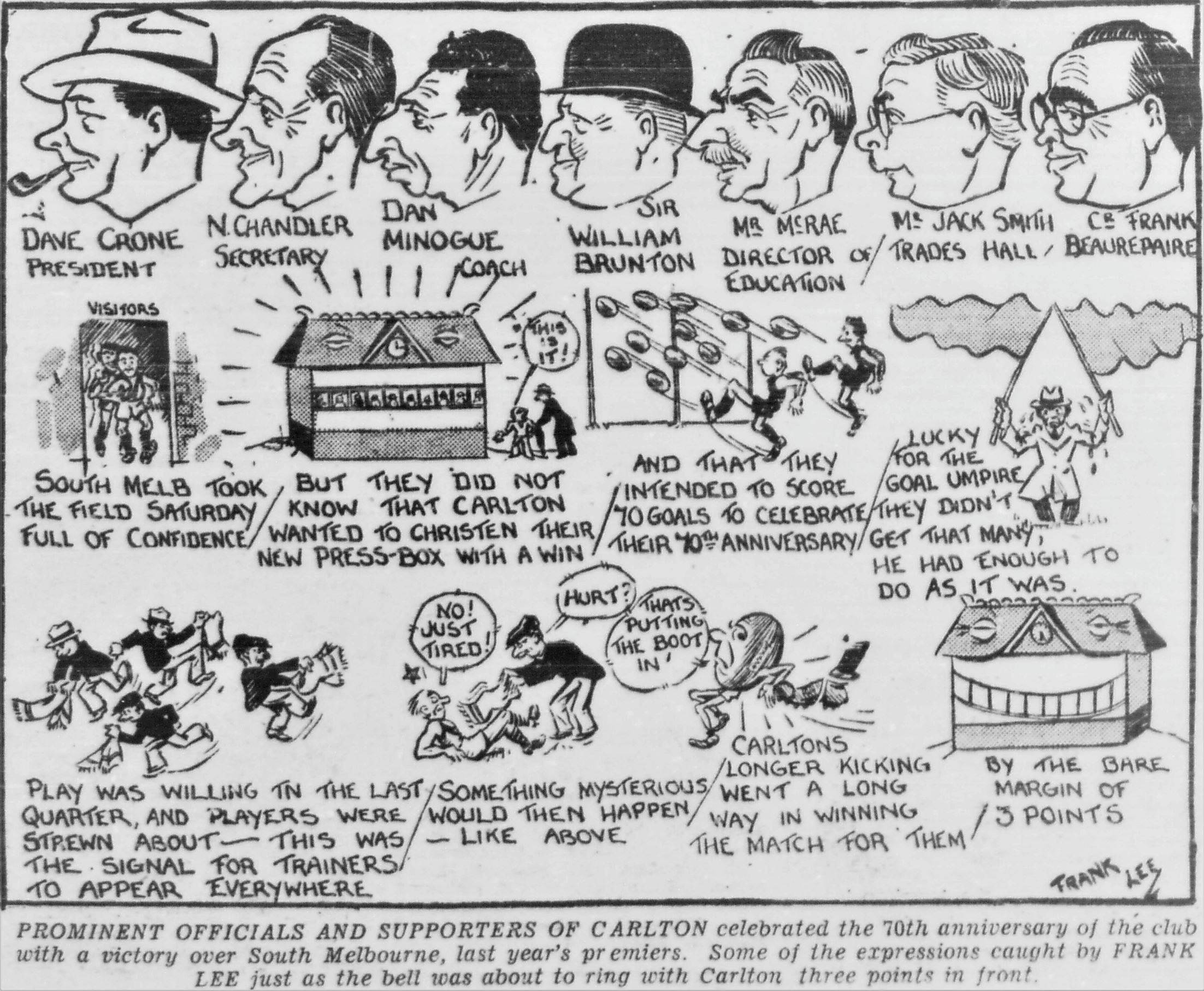