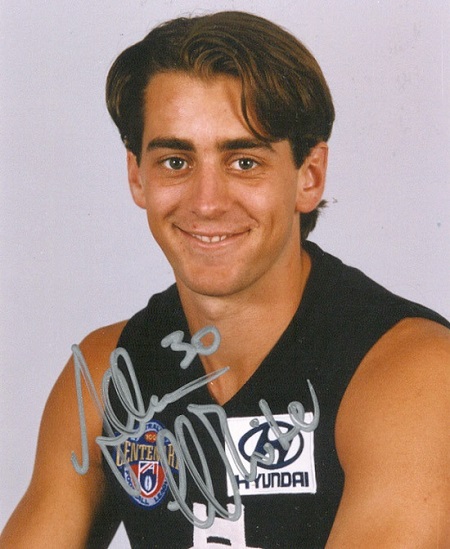 Adam White showed glimpses of real potential during his first three seasons at Princes Park, and played in two of Carlton’s 1999 epic finals matches. However, he is probably best remembered for a bizarre incident during the Blues’ loss to Adelaide in 1997, when he crashed into a field umpire and knocked himself out cold. After 44 senior appearances, White retired from AFL football in 2000, and launched a new career as an independent film-maker.

Well-built, with good pace and aerial skills, White was recruited by the Blues with pick 41 in the 1994 National Draft. Originally from East Burwood, he had impressed as a creative midfielder with the Eastern Ranges at Under-18 level. Carlton assigned him guernsey number 42 to start with, but after one season he switched to number 30. Two seasons of Reserves football followed, before Adam was selected for his first senior game against North Melbourne in a Monday night match at the MCG in round 2, 1997. Starting on the interchange bench, he was eased into the match, and kicked a goal on debut as the Blues went down by 26 points.

Over the next four seasons, White became a regular bench player who seemed most comfortable in the spaces on a wing. Like many others, consistency proved elusive, although he could be quite dynamic in bursts – as he showed against Collingwood in round 21, 1998 when he dashed from the centre and kicked a spectacular goal with one of his 22 possessions.

In 1999 he played finals football for the first time, but was sparingly used off the interchange bench in both the Semi Final victory over West Coast, and the following week’s one-point triumph over Essendon. He didn’t make the cut for the Grand Final against North Melbourne, and a persistent thigh strain disrupted his progress in 2000. He did eventually work his way back into the senior side, although his only appearance for the year - against Port Adelaide at Football Park in round 21 – was to be his last at top level.

Adam remained with Carlton Reserves throughout 2001, and retired at the end of the season. He headed back to East Burwood the following year, where he completed his tertiary studies in video production and photography before launching his new career behind the camera.

Over the next decade, White earned plaudits for his work as a director and producer of short films, including 'A Black and White World', 'Toucan' and 'Attack', along with the 10-episode TV series 'Kane & Disabled'.