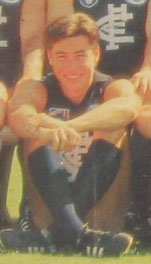 Andrew Leoncelli was drafted by Carlton with Pick 13 of the 1993 Pre-Season Draft, but was let go by the Blues after being recruited from Xavier College. He originally was recruited from Koo-Wee-Rup FC.

He moved on the Melbourne Football Club and played 146 games of quality football up to Season 2003.