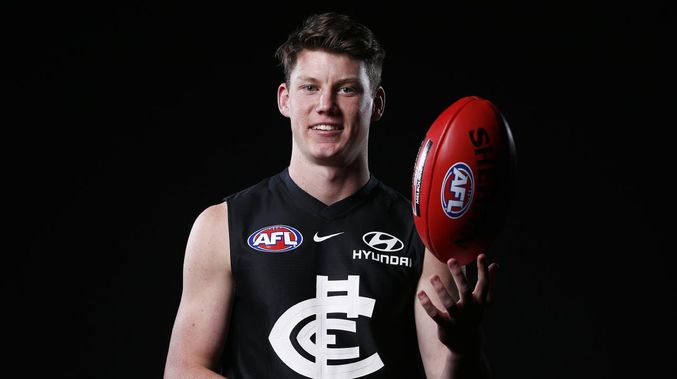 
Sam Walsh was recruited with Pick #1 of the 2018 National Draft. After collecting 29 disposals and 5 clearances as an underage player for Geelong Falcons in the 2017 TAC Cup Grand Final victory, there were high expectations of Walsh leading in to 2018 and he delivered with an outstanding season in which he accomplished just about every individual achievement possible including the Larke Medal for being judged the best player of the Division 1 National Under-18 Championships, voted by his peers as the Ben Mitchell medallist for best displaying the qualities of the AFL Academy, Vic Country Most Valuable Player, captain of the Geelong Falcons in the TAC Cup, captain of Vic Country in the Under-18 National Championships, captain of the NAB AFL Academy squad, captain of the TAC Cup Team of The Year and captain of the under-18 All Australian team. He also broke the record for most disposals ever recorded by a junior.

After three dominant rounds, Walsh was finally rewarded for his stellar start to his debut season by receiving the Rising Star nomination in the Round 4, 2019 match against Gold Coast where he racked up an impressive 28 disposals at 79% efficiency, 13 contested possessions, 7 clearances, 6 tackles, 1 goal, 1 goal assist, 7 score involvements & 5 intercept marks.

He became the first ever player in VFL/AFL history to record 24+ disposals in each of his first six career VFL/AFL games breaking the previous record of 4 held by mature age Geelong recruit Mark Bairstow in 1987.

Walsh completed an incredible debut season by breaking the record for most ever disposals recorded by a first year player (including mature-age players) by finishing with 554 at an average of 25.2 per game to break the previous record held by Toby Greene of GWS Giants who had 539 in 2012. He finished the season ranked 1st overall among all rising stars in total disposals, clearances, contested possessions, effective disposals, metres gained, kicks, handballs, inside 50s, uncontested possessions, Supercoach score as well as top 3 in total bounces, tackles and marks.

He also broke the record for most votes received by a player in their debut season in the AFL Coaches Association Champion Player of the Year award.

Walsh was rewarded for his unprecedented debut season with recognition from his peers as the AFLPA Best First Year Player in a landslide with 400 votes well ahead of Port Adelaide's Connor Rozee who polled 112 votes. Walsh also earned a spot on the wing in the AFLPA 22Under22 Team.

Walsh capped off his 2019 season by becoming the first ever Carlton player to win the Rising Star award, polling a record 54 out of a maximum of 55 votes, after several players such as Patrick Cripps, Marc Murphy, Jacob Weitering & Scott Camporeale were all narrowly pipped in podium finishes in their respective years. Walsh joined fellow Carlton player Maddie Prespakis who also won the AFLW Rising Star award earlier in the year.

Walsh showed no signs of second year blues in 2020, leading the club in AFLCA Coaches Votes and taking out the AFLCA Best Young Player Award as well as being named on the wing for a second consecutive season in the AFLPA 22Under22 Team. His outstanding season was acknowledged by his teammates with a nomination for the AFLPA MVP award. He also received recognition for a stunningly courageous mark taken running backwards into a pack headed by Port Adelaide bull Charlie Dixon by receiving Mark of the Year honours, becoming the first Blue to achieve the feat since Matthew Lappin in 1999.

Walsh took his game to another level with an outstanding season 2021, where he equalled Marc Murphy's club record of most disposals recorded in a home & away season - with a total of 656 at an average of 29.82 per game. His efforts were rewarded with selection on the wing in the All Australian team, becoming the 2nd youngest ever player to get a starting midfield position in the history of the team behind Chris Judd. He was also named captain in the AFLPA 22Under22 Team, which he made for the 3rd consecutive season, and named as the centre. He finished runner-up in the AFLPA MVP - a remarkable feat for a player who only turned 21 years old late in the season. Walsh finished off the year by equalling the Carlton club record of most Brownlow Medal votes in a season with 30 votes tying him with club legends Greg Williams & Chris Judd. This made him the 3rd youngest ever player in VFL/AFL history to poll 30 Brownlow Medal votes in a season behind Des Fothergill in 1940 & Chris Judd in 2004.