Arthur Wilson Chitty played played reserve grade football in 1940, he was the brother of Carlton champion Bob Chitty who was a hughly decorated captain and premiership champion for the Blues

"Arthur Chitty, a younger brother of the present player, came from Corryong, and impressed so much that it would not be a surprise to see him in the senior side this season. He had his hands bandaged as the aftermath of a boxing encounter last week at a travelling show at Corryong. He gained the points decision over his opponent in a 10 rounds bout." (Argus March 20 p17 1940)

Chitty was named in the Reserves Round 1 match on April 27. The name Chitty also appears in other Reserves sides whether it is Arthur or his older brother Bob Chitty will take further investigation. The Sporting Globe June 08 1940 (p5) mentioned Arthur Chitty in a run down of 33 Carlton players. The Globe said he was aged 21, weight 12 st. 2lb, height 5 ft 8ins. A farmer, local boxing champion, never knocked out / horse-breaker, and a prize winning gardener.

While Bob Chitty spent the war years of 1939 to 1945 playing football for Carlton, four of his brothers enlisted for active service. Bob always intended joining up too, but was talked out of it by the rest of the family, who wanted at least one male of his generation to stay at home in Australia to support their parents. Bob’s blossoming football career made him the obvious choice to stay back, and as events panned out, he was sorely needed. All four Chitty brothers saw active service. Three of them; Ron, Phillip and Arthur were sent to the Middle East, where Arthur was killed in action in July, 1942. Arthur Chiity joined the 2/23rd battalion A. I. F. and was killed in action at El Alamein Egypt on July 22 1942.Ron and Phillip were both captured by the Germans, and spent many months in a Prisoner of War camp before being repatriated home. (Arthur Chitty played for the Carlton Reserves in 1940). The fourth of the brothers; Les (who preferred the name Peter) also carved his name into Australian Football history in a unique way - as the one and only winner of the Changi Brownlow Medal.

Chitty was recruited from Corryong 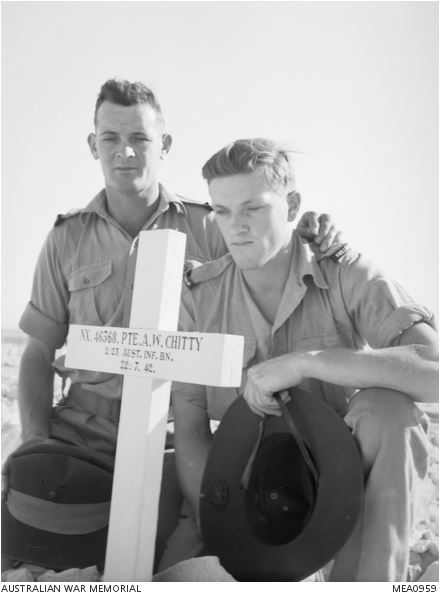 Right: Bob's brothers Ron and Phil visiting brother Arthur's grave at El Alamein Egypt in November 1943.
Ron and Phil both of the 2/2nd Field Ambulance were P.O.W.'s of Rommel's Afrika Korps and had been repatriated in 1943.
Pte. Arthur Wilson Chitty NX46368 K.I.A. Battle of El Alamein 22 July 1942 had played for the Carlton Reserves in 1940.
Image: AWM MEA0959