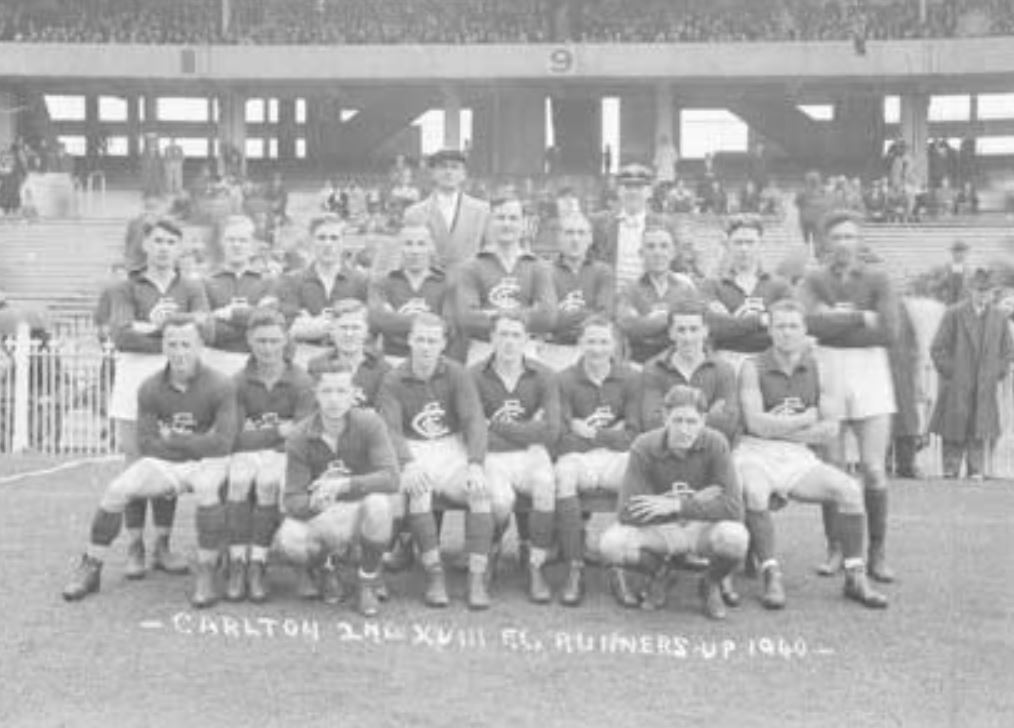 Note: Albert 'Mick' Price also won the Gardiner Medal for the fairest and best player in the VFL reserves competition

Reported to be training.

"Arthur Chitty, a younger brother of the present player, came from Corryong, and impressed so much that it would not be a surprise to see him in the senior side this season. He had his hands bandaged as the aftermath of a boxing encounter last week at a travelling show at Corryong. He gained the points decision over his opponent in a 10 rounds bout." (Argus March 20 p17 1940)
A Chitty was named in the Reserves Round 1 match on April 27. The name Chitty also appears in other Reserves sides whether it is Arthur or his older brother Bob Chitty will take further investigation.
The Sporting Globe June 08 1940 (p5) mentioned Arthur Chitty in a run down of 33 Carlton players. The Globe said he was aged 21, weight 12 st. 2lb, height 5 ft 8ins. A farmer, local boxing champion, never knocked out / horse-breaker, and a prize winning gardener.
Arthur Wilson Chitty (NX46368) joined the A.I.F. 2/23 Battalion, he and was killed in action at the Battle of El Alamein July 22 1942.
There is two photos taken in 1943 of two of his brothers, Ron and Phil Chitty visiting his grave. (See Bob Chitty's image gallery)

April 05
"Sons of former captains made an impressive first appearance at Carlton last night. They were, Flynn of Yarrawonga and Kevin Fisher a Brunswick boy. If they are as good as their fathers, Carlton will be pleased. Flynn is a 6ft. centre half-back, and knows the game. Bamblett brothers of Devenish, are wingmen of promise. One of them competed in the recent Stawell Gift. Cyril Johnson, a wingman from Bendigo, showed intelligence and dash. He is aged only 21 years. With so much good material Carney and Green will have to fight for their places on the wing.
Jones who played two games last year, and who was seen as a half-back last Saturday, will be tried in the centre tomorrow. (Argus p17)