Another war ends, and Carlton wins another Premiership.

The VFL would experiment with a 20 round competition in 1945, expanding from the traditional 18 rounds in 1944. This would be the only year that a 20 round competition was held until 1968 and 1969, and from 1970 the competition would permanently expand to 22 rounds. The VFL would also experiment with a 19 round home and awy season between 1946 and 1949, but had returned to 18 rounds by 1950. This would prove essential to Carlton's premiership, the club only making it into the top 4 after the 20th game of the season. 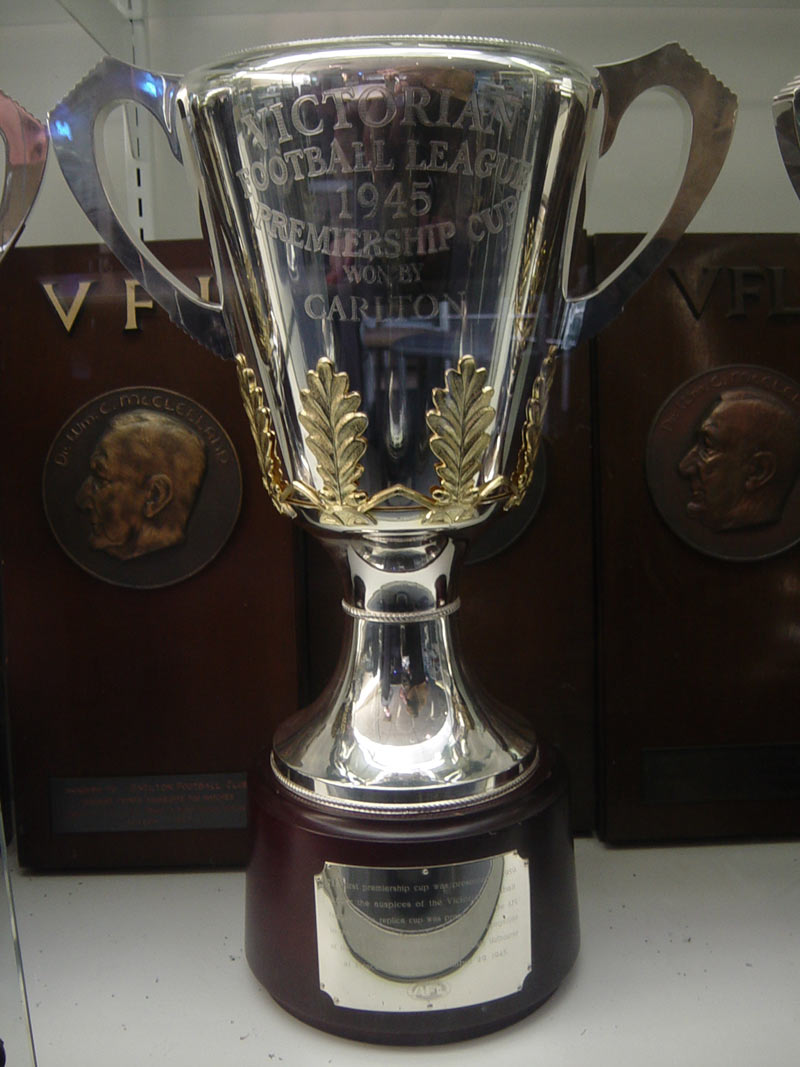 Carlton would win our 7th Premiership in 1945 by defeating South Melbourne by 28 points in the infamous "Blood Bath" Grand Final, one of the most famous games in VFL/AFL history. A premiership looked decidedly unlikely after just 3 rounds, the Blues managing to lose all three games to Melbourne, Hawthorn and Essendon, the last by an even 100 points. The club was last on the ladder, with a percentage of only 57.4%. Two close wins in rounds 4 and 5 saw the club rise off the bottom of the ladder and into eighth. The revival would be shortlived, 3 losses in 4 rounds dropped the club to ninth, and a finals appearance looked unlikely due to the club having a poor percentage and being two games out of the top 4.

The Blues turned their season around in a massive way from Round 10, winning 4 on the trot, having a close 3 point loss to Essendon in round 14, 1945, and then winning another 6 wins straight to finish the regular season. Carlton was perhaps lucky to still be in finals contention, 4 of their last 10 wins being by a goal or less, but come round 20 we would play Footscray for a finals berth. With the Blues in fifth, on the same amount of points as third place Footscray, a win would lift us into the top 4 for the first time for the season. The club delivered, handing out a 53 point thrashing of the Dogs at the Western Oval to clinch a fourth place finish.

The first Semi Final found us playing North Melbourne at Princes Park, and straight kicking by the Blues and woeful kicking by the Kangaroos handed Carlton the game. We would never be headed, after kicking 5.3 to 0.4 in the first quarter. By three quarter time, the scoreboard made woeful reading for North, Carlton leading 13.7 (85) to 2.13 (25). The game finished with a comfortable Blues victory, 14.10 (94) to 8.20 (68).

Destiny seemed to playing a hand in the Preliminary Final against Collingwood also. Carlton got off to a horrid start, trailing by 26 points at the first break. After narrowing the gap to 9 points by half-time, the club found itself dangerously close to losing at three quarter time, 28 points down. A magnificient last term by the Blues followed, kicking 7 goals and holding the Pies to only 1 goal to emerge with a 10 point victory (13.12 90 to 12.8 80) and a berth in the Grand Final against South Melbourne.

The 1945 Grand Final would become one of the most infamous and tough Finals of all time, and was so tough that it is now commonly known as the "Blood Bath" Grand Final. Bob Chitty had been appointed Captain for the 1945 season, a move that proved to be a master-stroke, given his inspirational performances leading up to and including the Grand Final victory. Over 50 years later, on the club's official web site, Chitty would be described as "...leaving a trail of broken red and white bodies in his wake".

No short summary can do this match justice, please visit the Grand Final link to get a full match report. A measure of the ferocity of the match is that the players of both sides were given a total of 69 weeks suspensions. Carlton would win the game, our first Grand Final since 1938, in which we defeated Collingwood, and provide an added bonus to the end of World War 2 for Carlton fans. This was the first flag for legendary coach Percy Bentley, who took the Blues to two Premierships in a 15-year career as senior coach.

Peter Motley and Craig Bradley with the 1987 Cup..jpg