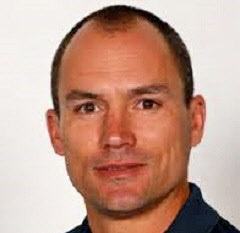 Brett Montgomery was a versatile all-rounder who played 204 senior games at the Western Bulldogs and Port Adelaide in an 11-season career between 1997 and 2007. In the process, he cemented a place in AFL history as a member of Port Adelaide’s first-ever Premiership team, and won a number of prestigious individual awards. After retiring from the field, “Monty” joined Carlton as an assistant coach to Brett Ratten in 2008, and stayed three seasons.

Originally from South Croydon, Montgomery’s AFL journey began when he joined Essendon as a 17 year-old in 1989. He played Under-19 and Reserves football with the Bombers for two years, only to be told that he wasn’t up to scratch. Somewhat disillusioned, he then packed his bags and travelled to England to console himself with his other sporting passion, cricket. Earlier, he had captained Victoria’s Under-19 team, so he was well up to the standard of English county cricket and acquitted himself well over two seasons.

By 1994 however, home was calling, so Monty returned to Victoria and laced up his footy boots again for VFL club Springvale, where both he and the Scorpions had an exceptional year. Following Springvale’s decisive victory over Sandringham in the 1995 VFA Grand Final, Monty was recruited by Footscray (soon to become the Western Bulldogs) and added to the their supplementary list. In his first year at the Western Oval he won the ‘Dogs Reserves Best and Fairest award, before being promoted and eventually making his long-awaited senior debut in 1997.

No speedster, but skilful and strong in the air, Montgomery played 60 games in his first three seasons before the Bulldogs surprised everyone by clearing him to Port Adelaide. That folly became obvious when he won Port’s best and fairest in his first season at Alberton, and was named an All Australian in 2002 – the same year he represented Australia in the International Series against Ireland. Two years later he became a Port Adelaide immortal as a member of their first-ever Premiership team, when the Power beat Brisbane in a hectic Grand Final.

Twelve months on from that triumph, there was another surprise in store when Port Adelaide delisted Montgomery as part of their ‘focus on youth’ policy. Monty was 31 by then, with 202 games and 119 goals to his credit, but he wasn’t ready to be put out to pasture. His old club the Bulldogs welcomed him back, and over the succeeding two years he played another 18 matches before calling time on his playing days when a serious back injury cut his last season short.

Meanwhile, over at Princes Park, Brett Ratten was about to begin his first full season as senior coach at Carlton, having taken over from Denis Pagan late in the previous year. Ratten wasted no time in recruiting Montgomery as one of his assistants, and together, the pair coached the Blues into the finals in 2009 and 2010. Then in 2011, the Western Bulldogs lost their senior assistant coach Leon Cameron to Hawthorn. Monty was out of contract at Carlton, so the Dogs swooped and he returned to the Western Oval for a third time.

Now, heading into 2014, Montgomery sits right at the top of the list of coaches-in-waiting, and it seems only a matter of time before he is appointed to the top job somewhere in the AFL.