October 2021: The club is looking for football items to be displayed in the new museum to be created with the redevelopment of the old Hawthorn/Pratt Stand. If you have any Carlton related items, banners, duffle coats, flags etc; please contact Tony De Bolfo at the club.


The Carlton Cheer Squad was established about 1960????.
If someone can help with the story and/or images of the Carlton Cheer Squad please contact Blueseum.
What happened to the banners that lined the fences in the 1960's and 70's? Who made them and where are they now? Does anyone have photos of them? Most of these members are now in their 70's what stories do they have? Get them out on Blueseum before they are lost.
Please contact Blueseum admin@blueseum.org

The cheer squad had around 600 members during the 1980's- 1990's. It orginally sat in the Heatley Stand, but as the "floggers" increased in size the club had them sit behind the goals. This move occurred in 1972.

April 2019, now for some good news. Blueseum will soon publish quite a few photos of Carlton run-through banners which have kindly been loaned to us by a long time veteran Cheer Squad member. 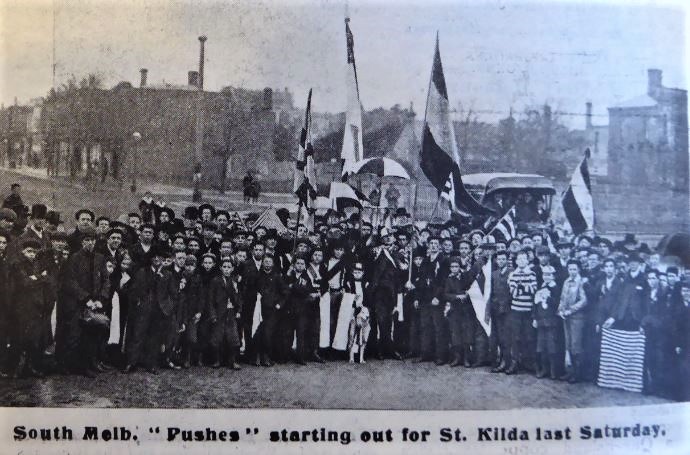 1907: So far, this is the only image we have found of an early supporter group. Blueseum presumes Carlton's and most other club's would have been similar.
Note: The absence of females, club coloured umbrellas, posters of players, extremely large flags, a dog in South colours, various South jumper types - sashes (both ways) hoops/stripes, a horse and buggy displaying a flag.
Round 7, South defeated St.Kilda by 12 points. Carlton thrashed Essendon by 54!
In the Pre VFL era mention was made of large groups of supporters carrying ribbons and team flags, horse and carts/buggies sporting team colours. So by 1907 these supporter groups, in various forms, had been around for a very long time.
Image: SLV, Illustrated Sporting and Dramatic News June 20 (p12), 1907

"Push" was an every day word for a street gang that was in usage up until WW1. Pushes were common place in Melbourne from the mid 1870's.
Most gangs and there were many of them, were not all associated with football teams. Some were so violent that a policeman would not pursue them into laneways.
By the 1920's special police squads had broken up the gangs. (e Melbourne the city past and present)
Further information on "Pushes" can be found here> http://www.emelbourne.net.au/biogs/EM00619b.htm

Carlton and the Elliott sisters - a love story

Carlton historian Tony De Bolfo's article on the Elliott sisters. As well as Barbara Elliott being named "Belle of the Carlton Ball" in 1960, Barb and her sister Carole were involved in the early days of the Carlton Cheer Squad.
http://www.carltonfc.com.au/news/2018-05-04/carlton-and-the-elliott-sisters-a-love-story

Navy blue duffle coats with players' name badges sewn on, with a favourite players number on the back were not only worn by the cheer squad, but by many of the public as well.

Each club's cheer squad had canvas/cloth banners which would line the fences of each ground. The away team had the outer end. These lengthy banners began in the early 60's and continued to be a unique and colourful part an Australian Football match until the league clubs became too interested in the revenue gained from placing advertising on the fences. By the 1980's the banners had disappeared, especially on the sides/goal ends in line with the TV cameras. Eventually they would go altogether in the grab for cash.
Over the decades, there were many other Carlton banners, some long, some short. Blueseum is searching for the details or photos of these Blues' banners. If you can help please contact us.

Probably the longest one In the League was;


CRIPES! YOU GALAHS COULDN'T BEAT CARLTON IN A MONTH OF SUNDAYS OUR BONZER BLUES WILL DO YOUR MOB LIKE A DINNER AND WE'RE FAIR DINKUM SPORT. COME ON YOU BLUES.

This used to be placed on the city side/southern fence from the wing to the forward pocket, Heatley Stand/Royal Parade end of Princes Park.
The cheer squad would take the banners to the away grounds, in an old navy blue coloured van adversiting "Sires" menswear on its back roller door.

Another very long banner from the 1972 era. Can be viewed in the 1972 drawn Second Semi Final at VFL Park, see link below.

This banner in Old English lettering was in the forward pocket/goal Heatley Stand end.

1972 Second Semi Final (drawn) All three of these banners can be seen here> https://www.youtube.com/watch?v=KOybhb2Hqgc

Round 5, 1967 Carlton played St.Kilda at Moorabbin. Banners lining the outer fence can be seen in this Channel 9 replay> https://www.youtube.com/watch?v=2jChq8atbMM 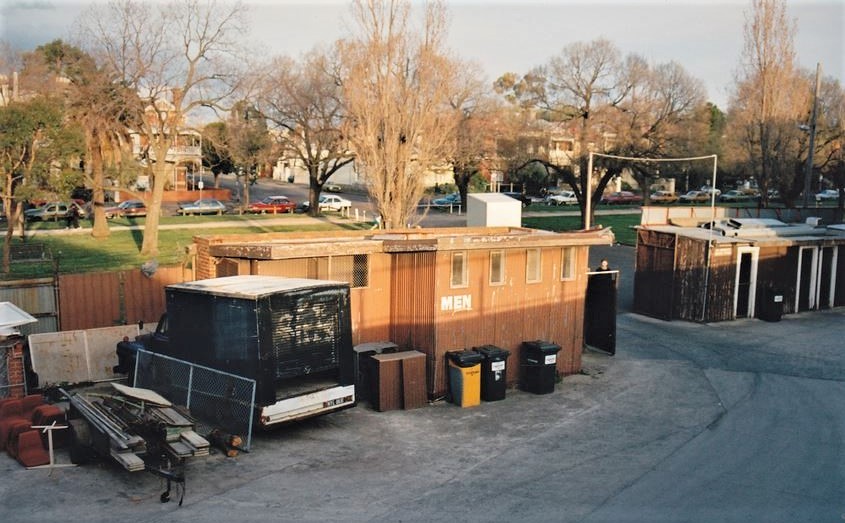