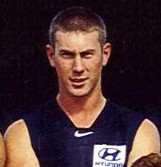 
Lang played 5 games with the Sydney Swans in 1994 and was later rookie listed by Carlton and played 3 games from round 7-9 in 1998. He was a 191 cm forward who could kick goals. In the reserves he could mark on the lead - he wasn't a pack marker - from 40 metres out on the boundary and slot it through. His shots on an angle were a real highlight, and surely signs of a youth spent in the pocket. Unfortunately, Lang was also only 78kg and wasn't of the size to be a key forward in the AFL.

In 2000, Damian Lang headed off to play with VFL club Coburg-Fitzroy with ex-Blues teammates Matthew Hogg and Damien Lock where he would play 26 games and kick 12 goals. Lang then headed to Ovens & Murray team Wangaratta Magpies for the 2002 season.